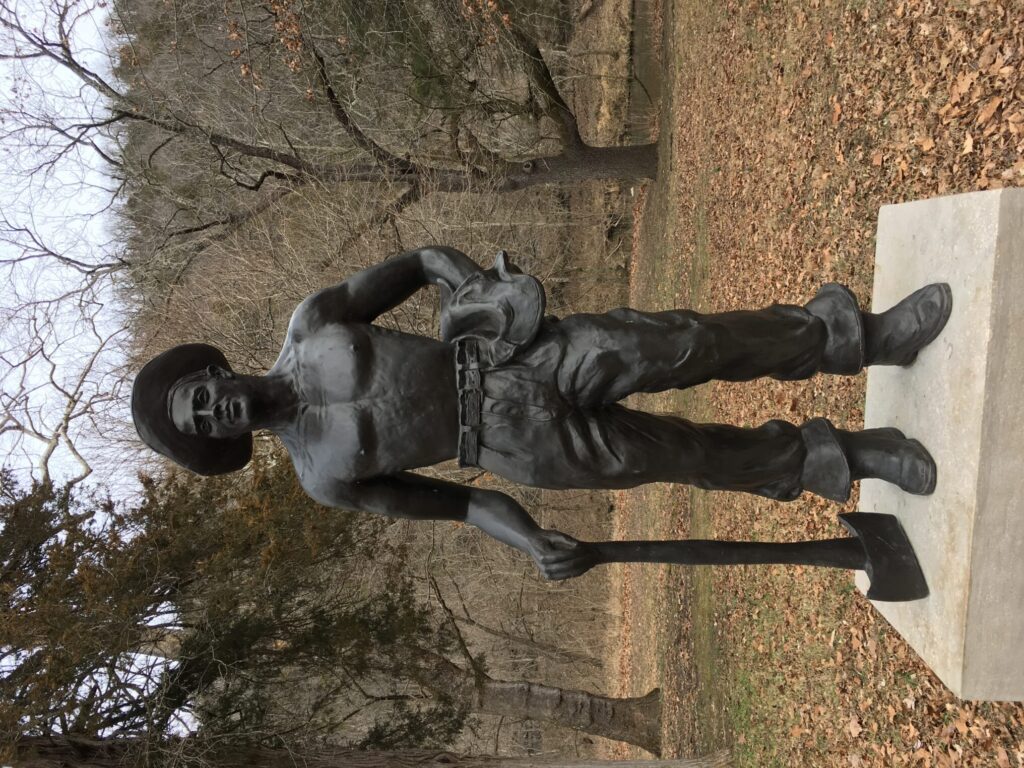 We’ve reached a great turning point, the Opening of Trout Season, March 1st. A week ago it iced all the way to Texas. Snow plows and cinder trucks growled. A pipe froze in our Springfield apartment.

Saturday, the 6th, offered the opposite. Beginning with a 6 a.m. alarm, I wanted to get to Roaring River State Park early. Cath couldn’t go; she had a Sierra Club meeting on Zoom. I needed to get to Tim’s Fly Shop before hiking.

“Are you sure you should go? Look at this fog!” Cath’s a consistent worrywart, but she managed to go back to sleep with finesse.

Our snow’s slowly going back to heaven. Sun broke through by the time I got to Cassville. Three cups of joe and listening to old time gospel music to wake up, I switched on Audible to hear Edward Ball read his great new book, Life of a Klansman: A Family History in White Supremacy. Scary, but as fascinating as his previous prize-winner, Slaves in the Family.

Tim’s shop was busy. It’s one of the best fishing stores in the state if not the Midwest. Lots of people, walls of inexplicable stuff. I wanted him to look at an old fly rod I inherited. Been thinking of selling, or maybe fixing it up.

Tim Holmesley’s an expert. He buys and sells bamboo rods regularly and owns, “Probably about 400 now,” Tim said with pride.

“You’ve got to see Gordon Roller. He’ll show you how to make it fishable.”

Some 20 folks met mid-morning near the park entrance, a deep hollow in rolling farmland. All but Ben and I, these healthy women have had enough quarantining. We drive a minute to the Eagle’s Nest Trailhead and quickly start up.

Glad to be out of the city, I opt out of chatting. Instead I listen to the actor Anthony Heald perform Moby Dick, Chapter 106 “Ahab’s Leg” and most of 107 “The Carpenter,” which shows the mad sea captain at his craziest. The carpenter reminds me of my friend Kent Brown, a cabinetmaker who is helping me build some planting boxes for our apartment porch.

So many steps to build anything, so many to climb a mountain. It’s an education working with a true craftsman. This rocky path soften by bright green moss, I go slow, no rush while enjoying warmth and words.

The Moby Dick recording totals 24 hours. The reading continually amazes me, but I’ve been at it for a month because the weather has been too crappy for walking. Then I think of those old salts chasing whales and living before the mast.

Laura’s a little like a sailor. She’s not afraid of work. She loves being involved. Though she still runs a medical business, she’s no autocrat like Ahab. An early spring jaunt’s enough to relax everyone, even our leader.

Hiking for two hours then driving to meet the group for lunch by the historic trout hatchery, I notice several large groups of fishermen, families and friends camped under big ‘Trump 2020’ flags. They remind me of the Klansman book, and I commiserate with the complexities of contemporary politics. How long will our ship of state maintain its course? Can we agree on anything anymore? The author estimates half of modern day white Americans have a history of a Klu Klux Klan member in their family. Edward Ball’s introduction notes Donald Trump’s father was an active Klan member who was arrested after a 1927 anti-Italian riot in New York City.

The hatchery is amazing. Dating back to the 1930s, the concrete ponds nestle around a high bluff and natural spring, the main source of Roaring River. Millions of trout swim while hundreds of visitors explore this human-created habitat.

Everyone seems excited. It has a feeling of Christmas and New Years all rolled into one. I worked at Maramec Spring Park where trout fishing was also a big deal on opening day. It’s a time for reunions and kicking winter goodbye.

But I can’t find McCaskill’s hiking crew. I call and Laura says they’re about to start another hike.

I say I’ve decided to find the local bamboo rod expert, “Catch y’all down the road.”

Gordon Roller proves to be a master craftsman with Tonkin bamboo imported from China to build new rods. He’s even invented a machine to apply varnish evenly once the cut pieces are fit together.

“Your fly rod is typical of what was sold back in the ‘20s and ‘30s at gas stations, bait shops and so on. The Granger Ranger was good for everyone,” Mr. Roller says. “But yours may have some weak spots. It’s so old! You’ll have to be careful when you get a fish on. Don’t fight him. Let him wear himself out. That old rod could break anytime. Be careful.”

That’s common sense. Try it out, make it work. Pass it on.