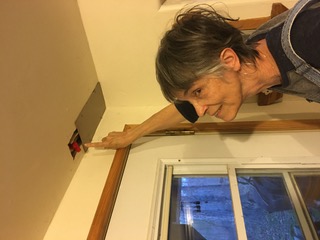 It began with a bang. Starting up water service in our cabin, immediately the plastic filter fell to the floor. The tank flooded the basement.

Luckily thinking fast, I shut off the supply line. We had turned off the water for winter.

Who left the filter off? I picked up the quart-sized plastic vase that holds a woven fiber cartridge.

Looking it over carefully: I see no one had left it off. It had broken off. The threaded part of the vessel remained on the housing along the water line.

Cathy came down to the basement to look over the mess. We discussed it briefly, then I remembered the Freaky February Freeze.

We had about a week of temperatures below zero even in the warmest part of day. The basement and water line must have frozen too.

Luckily we have incredible neighbors here in the woods. Sam lives a quarter-mile up the road and can repair anything. He studies engineering, channels his father’s architectural spirit, programs anything and did time with a huge phone company before realizing he wants to live in the woods.

Sam had a similar plumbing problem a while back, and agreed to help replace our whole-cabin filtering device.

But first I had to check with Bill Bill, the man who designed and built our cabin, including the solar, electric and plumbing almost single-handed. He deserves this double moniker for having built three amazing residences in the Greenwood Forest Land Trust. A true Renaissance man, Bill Bill is the main guy in this part of the Ozarks doing solar installations. Sometimes I think there’s nothing he can’t do.

“This is our house,” Cathy says with certainty, “Bill’s and ours. He always said for a little bit more you could have a loft you where you could actually stand up.”

He insisted the place needed a basement. It was a good decision; we’ve used it several times in tornadoes and other storms as well as for sleeping in the heat of summer. Normally basements don’t freeze, Bill Bill pointed out, and agreed Sam has the smarts to  wrangle this.

Sam repaired the water line filter yesterday. As soon as we turned back on the water, it started leaking out of the ceiling. It dripped on Cathy as she complimented us on a job well done. The pipe goes to our outside hose bib and dripped steadily.

The shut-off valve must have frozen too. Bill Bill said he’ll come over to look at the problem. Sam has had enough of messing with Sandstone Cabin for a while. Can’t blame him. Plumbing can be a trial to frustrate the likes of Job.

Is it worth the hassle having a cabin? A friend told me once on a typical weekend he does chores, mows the lawn, catches a nap then fights a huge traffic jam going home Sunday afternoon. They sold the place after a few years.

“It’s tricky replacing brass on plastic,” Bill Bill explained. “If you don’t tighten it enough it will leak; too tight and the plastic will break.”

This is why I appreciate Bill Bill and Sam. They know about this stuff. I find it endlessly fascinating, had a few artist friends who worked as plumbers in SoHo while developing their painting careers, but I tend to trust experts with technical knowledge.

I mess around with all kind of chores when I’m at the cabin, hike and float as much as possible, cut firewood, look for mushrooms or neat rocks, feed the birds, listen to rain, check the weather forecast, battle packrats, see what the neighbors are up to, read all kinds of old books, try not to get worked up over politics or not answering emails for a week or two.

Spring wildflowers completely renew me. When I get really old I’ll have to spend all spring in Shannon County to sustain sanity. At least hike out for a night at our local sinkhole pond when the amphibians are at peak chorus. Is this the ultimate luxury?

We could hardly talk last night it was so loud. Millions of frogs and toads were celebrating in their five-acre swamp. They must have felt exactly as Cathy and I did after four days without much water or a shower. What makes wetness so necessary?

Before falling asleep I listen to a musical insect chorus, the first high-pitched drone of sunshine warmth. Maybe this is what the amphibians were celebrating too. We’ve made it to a season of moths and butterflies, ticks and chiggers, flowers and warblers, the swimming holes and sweaty nights of summer when full body immersion becomes the necessary luxury.