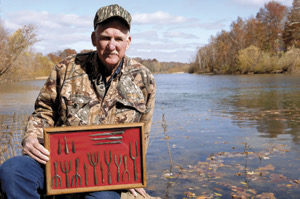 Hard to believe that it’s been six years since I’ve had a chance visit with folks in Ripley County. I’ve decided to post now this because Ray Joe is one of the best storytellers I’ve ever met.

Whenever possible I stop by Doniphan, once known as ‘Railroad Tie Capital of The World’. History lurks everywhere in this town—the people, buildings, even in gas stations where you find flyers for revivals, coon dog water trials, auctions and other crucial matters.

They also have the Current River Museum, one of the best of collections of river-related material culture anywhere. Stuffed fish, Native American relics, a boat or two, fishing equipment, endless fascinating junk which even my wife admits deserve a second look because it all is so tidy and orderly in huge glass fronted cases.

“Have you seen the sweep yet?” asked Lynn Maples, curator for several years, when we walked in one toasty August afternoon. “It’s this huge chunk of wood Ray Joe and his friends recently brought by.”

In the main gallery this tapered log, almost 20-foot long and maybe 4-5 inches thick at the butt end, was attached to a fairly rotted pine board. The whole thing looked too gone even for punk to start a fire.

“They just found it in the river, that’s all I know. But it is in pretty good shape for being maybe a century old,” Lynn said.

Across the room on top of a display case a reconstructed sweep sat on a case with logging tools and other relics. Ray Joe had also found just the wooden pole for that sweep several years ago. He hypothesized the wooden board that made the rudder-like sweep was just too valuable in the old days to not carry upstream to use again.

Sweeps and logging tools all relate to Doniphan’s claims to be railroad tie center of the universe. Hundreds of millions of solid oak railroad ties have been rafted down Current River to Doniphan. At this town of 2,000 hearty solid-oak souls, the ties were hauled from the river, dried for a few days then loaded onto railroad cars to be shipped out for chemical weatherizing and use holding iron rails into the great American West.

“Can I use your phone to call Ray Joe?”

Ray Joe and his wife Polly have a new house outside town near a nice pond that probably still holds fish if it doesn’t dry up in this drought. He had told us to come around back by the lower level. It took me a while to figure out why.
Big glass doors looked out over the pond. A sort of patio back where he had parked his truck and the lower walls of the house were open-air storage for some of his personal collections: blacksmithing equipment, fish gigs and tools of all kinds.

“I’m still sort of moving in and figuring out where to store things,” Ray Joe said. “There’s a lot involved in settling into a new house. I’m planning on building a shed soon.”

Amen brother, I am still searching around for some of my prized goodies after settling into a little cabin near the Jacks Fork River, a tributary of Ray Joe’s beloved Current River. Reflecting back on Cathy and my recent visit, I can see Ray Joe has bitten off a lot in relocating away from his river house.

I first met Ray Joe when organizing an exhibit on Ozark crafts for an art museum in Louisville, KY. Another guest curator brought together Appalachian crafts to create a comparative exhibit. Both regions have similar craft traditions, but the Ozarks is unique in having a long history of using bows and spikes—arrows pointed with small hand-forged two and three pronged gigs—to hunt fish mainly in shallow streams of the Current River basin.

Two of these fishing spikes were on a round table in front of his fireplace when we walked in.

“I went out a few days ago with a friend, but we didn’t do any good at all,” Ray Joe said. “We went up and down a good sized creek but really didn’t see any fish worth trying for. It was sort of disappointing.”

A couple of years ago Ray Joe completed work on his history of traditional spike fishing, Bow and River Gigs, which has dozens of photographs and stories about his research into this unique Ozark fishing method. The book ends with a brief autobiography showing how his life on a Depression-era Ozark farm led him to explore, enjoy and finally research the region’s traditions.

The basement room where we talked serves as what some might call a ‘man cave’, a place to lay low during a hot day and cogitate, to talk with your friends or hide out when necessary. One end of the room held a huge fireplace.

“I hope I don’t ever have to use it,” Ray Joe said. “I’ve put some of the best rocks I’ve found over the years in it. I just don’t want to see them get dusty or smoky.”

Some of the stones—many of which he carried out of the deep woods while hunting—seemed to be geological specimens displaying how the earth and centuries create the most bizarre examples of physics possible. Upstairs Ray Joe took us on a short tour of the rest of his new house and showed another fireplace built with other stones he had collected. These were more uniform in shape and color but still had amazing patterns. This was in a more formal living room, no artifacts present: Polly’s zone.

“I’ve had some of these 20 or 30 years,” he said. “I call this the work of a Rembrandt of stone masonry.”
Outside alongside a line of trees Ray Joe showed us his rock collection sitting on several dozen wooden pallets.
“See this one,” he said pointing out a weather piece of sandstone. “I was out squirrel hunting and saw it. I’ll bet it weighs close to 100 lbs. but I knew I’d have just the place for it. It about broke my back but I packed it out eventually.”

Still standing 6’6” and nearing his mid-70s Ray Joe doesn’t let much slow him down. He and his Ripley County friends have done a lot lately to encourage interest in Current River history by organizing three re-enactments of railroad tie rafts during the last decade. Internet sites have excellent stories and photos of the effort required to organize and bring several hundred ties downriver for the community’s annual Labor Day festival.

We were able to see the 2009 raft come in at Doniphan with maybe a thousand other spectators on boats, shore or from the new highway bridge. It makes you proud to see a dozen or so mainly old guys plus an occasional kid or gal pushing those long poles to keep the raft going downstream as so many had decades ago.

“Do you miss living out on the river?”

“You know this house is more Polly’s idea. I haven’t sold the river place yet… it takes a while to move out. I miss being able to walk down to Current River as I used to all those years. But I have to say it isn’t like when I was growing up.”

“Do you mean all the boats on the water now?”

“Sure, but the motors are so much bigger. They wash the banks something awful. I can spend an hour setting a varmint trap just right, covering it up with brush up out of the way in some old slough, and a big jet, 200 or 300 horsepower, will just wash it all away. They get several dozen boats and those kids just party and carry on in one of the big bays we have on the lower Current. You know the pickerel don’t like all that racket… and you can’t fish with all this traffic anymore.

“But, I have to admit I was a little like that too once. When I was a kid, 50 horsepower was one big engine. We were always wanting a bigger motor. So now someone ought to set a limit at least for the wildlife.”
Ray Joe also bragged a bit about winning a 40-mile canoe race on the Jacks Fork as a young man… something over two hours to run that course and he won it twice.

“I’d like to see some kind of realistic horsepower limitation on the river. These big motors are killing Current River. It’s a dead river to me now.” 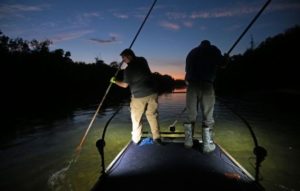 This photo shows Ray Joe on the right and a friend out gigging. Photo from St. Louis Post-Dispatch to illustrate an article written by Jesse Bogan, an excellent piece easy to find. Featured photo from Rural Missourian magazine. Be sure to look for Ray Joe’s book, a real classic!