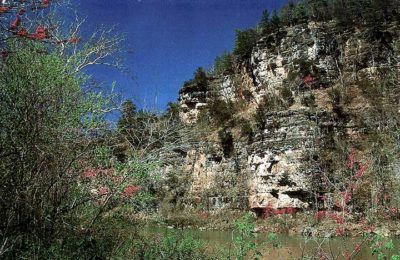 I’d been warned twice about this place. Subtle warnings, but still I knew enough to avoid this end of the road.

It came up quick. No place to turn around behind us, so I turned into the first place I could. Immediately my truck got stuck. Like up to the rear axle in deep river rock.

This began simply enough. My 15 year-old foster grandson Tristen had been visiting our cabin near Jacks Fork River for a few days.

The hottest week of summer so far, and no a/c in the cabin. We’re fishing, swimming and hanging out by the river. No problem.

Except last Friday. I thought it would be fun to see how we did at one of the prettiest spots on the river, Bee Bluff, just upstream from Bay Creek.

The Ozark National Scenic Riverways– a linear park along the Current Rivers and its tributary, the Jacks Fork– abounds with amazing places. Driving down to the National Park Service access at Bay Creek, we pulled over to talk with a ranger.

“That road going toward Bee Bluff is fine,” the man said. “Just when you get close to the last stretch on the gravel bar it gets a little soft because of all the flooding in the spring.”

Tristen and I drove up, unloaded the canoe near the last camping spot on the road, then paddled our way up to Bee Bluff for the afternoon.

The bluff creates a fishing hole a half-mile long and seemingly as deep. As pure as summer sky, the Jacks Fork remains clear and inviting. Tristen landed a bunch of small-mouth bass and threw them all back. “It takes five years for one to grow to be a pound,” he explained. “I never keep ‘em.”

I got one bluegill that would be small in an aquarium. But did catch a great nap.

Finally the afternoon heat was breaking. I paddled Tristen downstream. In fifteen minutes he caught a half dozen bass that others might have legally kept. All on a brown rubber worm.

We loaded up, saying’ hi’ and ‘bye’ to the folks at that last camp where we had parked. We headed up what I thought was a shortcut back toward the cabin.

Wrong road. Earlier in the afternoon a young woman had been hanging out up by the bluff to cool off before driving back to the city. Maybe in her 30s, she said some guys had helped dig her vehicle out.

For us, all of a sudden the road turned soft. “Turn in here, then you can back out,” Tristen suggested when we hit the loose gravel.

Oops, we got stuck by a big ol’ sycamore. Backed up a little but just got deeper into that river rock.

Near dark, I walked back to that last campsite to see about calling a wrecker. Tristen stayed to keep trying to dig us out with his hands and an old paddle.

No cell service, we’re way out there, the gentleman said. He offered to take a look at where we’re stuck.

“You take good care, that’s my truck,” his wife exclaimed. Grabbing a 20-foot log chain stowed with his gear, he put up the taters he’d been frying over a fire. “Save me some!” Off we go back up the road.

Jim explained his family tries to camp here once a year. His father grew up in a log cabin with a dirt floor not far from the Jacks Fork.

“This ain’t nothing,” Jim said when he first spotted my truck. “If I had my one-ton hay truck we usually bring, I’d had have you out in a minute.”

Jim’s efforts turned out to be the longest ten minutes of my life. He directed us to place his chain on three different places on my quarter-ton then inched us sideways. Tristen and I kept digging loose gravel away from the tires.

He pulled that truck from in front of the monster sycamore blocking us. We left a big hole full of sticks and rocks in the middle of the road to warn people to watch out.

Be careful! Jim and his family from LaRussell, Missouri, may not be there to help you get out of that ditch in the middle of Nowheresville. 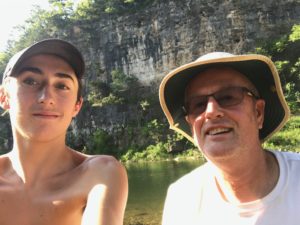