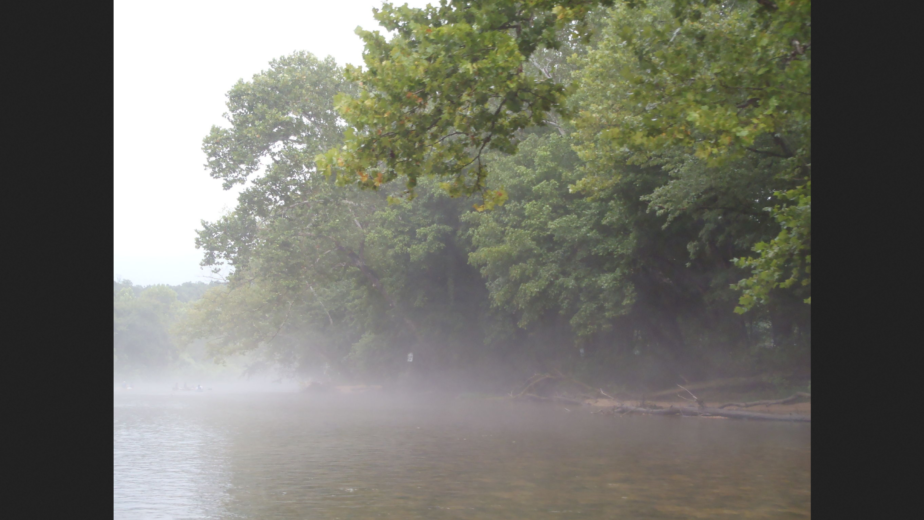 This story involves my growing up on the edge of the Ozarks. This may be the beginning of my roots in oral history projects. I think of ol’ Charlie all the time…

Impressions staying the longest often involve rivers and dogs, or at least summer, when Charlie’s wife took off from working in a Kansas City hospital. Warm weather can last into December in this central part of the Ozarks.

My father first brought me to Trails End Camp when I was about 10 years old. He had been going fishing there with a friend from work at his newspaper. I was surprised and honored to be invited to go on the three or four hour drive from St. Louis down old Rt. 66, the Mother Road as it’s now known, to the big town of Lebanon then onto small highways north to Charlie’s farm.

It was mostly a fishing camp with two or three cabins, though he tried a few crops. As bald as a cannonball with a belly even bigger, Charlie mainly wore blue denim overalls, baseball cap, no shirt or drawers, and clodhoppers without socks. A light white fuzz covered his tanned shoulders and arms.

And a smile. Charlie seemed perpetually happy. Maybe he was part polar bear. Sometimes we’d be going upstream with dad’s 2 1/2 horsepower outboard, Charlie would just hop overboard. This was summer which can be as muggy as it’s baking. We spent a lot of time swimming and resting while fishing in the shade.

As much as boating on a river so clean we could drink it, Charlie’s ability to play music most stays with me. His dog also could carry a tune. Almost sing.

“I’m going to send a letter to New York to get you on television,” my dad would say, and Charlie would laugh that he didn’t know how he would get 900 miles east. He had an old rattly pickup truck and no TV set in his valley near the Niangua River as far as I knew.

“You and your dog would be great on TV! Johnny Carson would love you!”

This must have been in the late 1950s before the interstate highway changed the way we drove, before I became a teenager, before we invaded Vietnam, before everything got crazy.

Luckily this was not before tape recorders became available to the general public. Timon recorded Charlie playing his music. Wish we knew exactly what happened to the tape.

Timon had a reel-to-reel machine. He loved high fidelity music and all the latest technology.

Saturday evening, if I remember right, the Grand Ole Oprey would come on a local radio station. Charlie and the half breed German Shepherd would be waiting..

Charlie’s only instrument was a tin tomato can lid he would fold in half then cut somehow. The thing would vibrate in his lips as he hummed along with a song. He could do a few more trills which added to an erie warbling wave vibrating across the cabin somewhat like a bagpipe before the Scots charged into battle.

As soon as Charlie started playing alongside the country music, his dog began a low howl that quickly expanded in volume and range. I remember them listening to the popular songs together to create a slightly harmonic racket. Dad and I just laughed.

I doubt if they ever sent a tape to New York. This must have been their main entertainment during the rough, grey season of winter into spring without a Mrs. nearby.

Charlie’s lane down into the creek valley would wash out during gullywashers. Sometimes Charlie would have to meet us at the top of the ridge by the county road to pile us in the front seat and all our gear back in the truckbed.

Usually it was just a long weekend visit.

The pace changed at Trail’s End. We would use a long net to catch minnows in the creek that ended by this bend of the river where Charlie tried to raise tomatoes. We would also dig worms out of this bottomland field.

The river seemed to breed millions of bright green fish called crappie, pronounced ‘crappie’, which knew how to unsnarl worms from our fishing hooks. They went to college to learn how to do this, dad said. Luckily we had plenty of bait and time.

Our old casting rods taught us to be as patient as the crappie. We would throw out a lure like a Lazy Ike and the line would tangle up half the time. It could take an hour to take a bird’s nest out of a casting reel.

Never any rush on the Niangua. If you got thirsty, just dip your cupped hands into the river for a drink. All the farmers made their own wooden johnboats and kept them pulled up on the banks. No chains or locks, just a spooky big ol’ dried up catfish head nailed onto a tree trunk protected Charlie’s two or three old boats. No roaring huge outboard motors. Most had wooden oars and an old coffee can to dip out the river that gradually seeped onto the mossy wooden floors.

I went to visit for a couple of days before going to Vietnam, but the river was flooding. No good for fishing. Charlie probably shared some of his tomato wine with me. I was old enough, 23, just graduated from college.

Nervous about the Army, I didn’t know what lay ahead. My father and Charlie were both Navy veterans. They didn’t dwell on those years, just some of the crew-mates and battles they remembered. They were both lucky to have survived duty on big ships in the Pacific.

I would be lucky too. But I didn’t know that. I didn’t know I would never see Charlie Brown again, his wife or his tent house or cabins or even that creek valley along the Niangua River. I probably knew river water may never again be safe to drink. Would anyone ever again hear a tomato can lid play a concerto with whippoorwills, a staticky radio and an old dog? I didn’t know that Charlie’s one big bottom field made the best wine I would ever taste again.