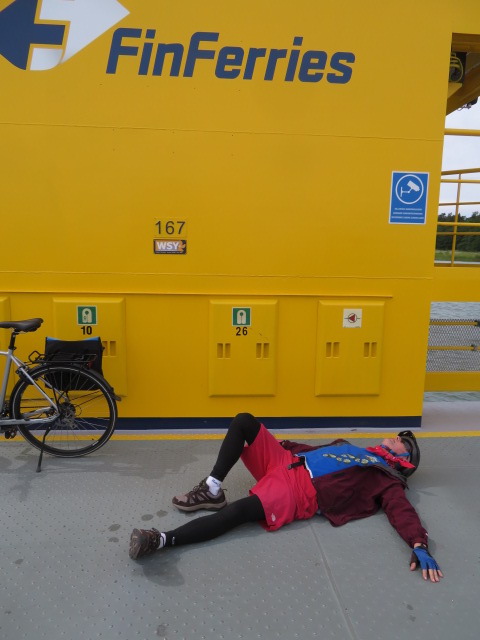 A month ago I was on one of the most spectacular cycling trips in the world, the Finnish Archipelago, some 20,000 islands stretching west toward southern Sweden across the Baltic Ocean.

I never expected to be so knocked out by endless pine trees, sand dunes and herring three meals a day.

Maybe it was just the challenge of peddling 200 kilometers over four days.

Cathy and I had come here in part to attend the International Oral History Association’s bi-annual conference further north in Jyväskylä, a stunning university town and home of the late Alvar Aalto. He designed modern bentwood chairs you see everywhere and practical homes for the middle class.

The bike trip was a splurge. Offered by a Canadian tour firm, their dates fit perfectly. We had to fly to Latvia in July to see friends for the 100th Anniversary Song Festival. That’s another incredible event, nation and story.

Ours was hardly a wilderness adventure. More a fast-paced ramble through idyllic countryside with occasional villages, coffee shops, bakeries, ancient churches and lots of bridges.

We had to catch certain ferries certain times or we’d be sleeping in the bushes. The twisty route came up on our cell phone.

Luckily for us it didn’t rain a drop. Temperatures stayed around 70, warm for them.

Actually it has become a huge drought all over northern Europe. The heat got worse even further north above the Arctic Circle. Reportedly dozens of forests burning across Scandinavia. Even tundra said to be smoldering.

How can anyone deny global climate change should not be a top priority for public action?

Luckily one other couple signed up. Murray and Maree, technically savvy folks from Perth, Australia, set a healthy pace to get us to ferries on time.

“Pushed us without being pushy,” Cath says.

“You missing that big ferry on the second day.”

I was the laggard. Tried to keep up with the others but I spaced out on the beauty with the long white nights so far north. My birthday is the summer solstice. I had always dreamed of traveling to Sweden at this time of year because Midsummer is such a big deal.

The major part of my mother’s family hails from Sweden. Cousins generously hosted us for a several days after the song festival. All over both Sweden and Finland we saw small birch trees cut as solstice decorations. Tall poles stood in town squares with ancient symbols decorated with fresh flowers. Earth spirits seem strong still in the Nordica.

Just this one ferry, that’s all I missed. I saw its giant superstructure silently pull out seemingly though the pines as I soared downhill to the landing.

“Murray said he saw you. I barely made it, and rode right on board as they drew closed the big doors,” Cath recalls.

I wasn’t too worried while waiting. Napped and rehydrated, though hated to miss the ride with our little crew. An hour later another big yellow ferry came back.

Cath was waiting for me and led the way to a pub where Murray gave thumbs for the local brew.

Ferries won’t wait. Friends may. Your partner may laugh forever if you’re a hillbilly.