While soaring with uplifting music my mind floats back to Maries County, one of the smallest, sweetest bailiwicks in the Ozarks. To the south of the Missouri Rhineland, Cathy’s mother grew up here on a rugged farm along the Little Maries River.

Listening to the visiting Tuskegee University “Golden Voices” Concert Choir at Brentwood Christian Church in Springfield also offers a transcending experience. For two hours on March 11th, some 30 young people fill the sanctuary with renditions from Gabriel Fauré, Wolfgang Mozart and Randall Thompson among other composers.

My wife Cathy’s late mother, Rita Bauer Kovarik, grew up near Brinktown, a village of 25 souls. It used to be at least twice that.

“I never heard her say anything bad about anyone,” Cath claims. I’m sure that’s right. Rita would have loved the Golden Voices Choir.

The concert kicks off with a traditional “Doxology,” a calm, reassuring rendition. The arrangement by Khalil Koger features four repetitions of “Amen” with different intonations, speed and volume. That’s a kicker!

Rita probably learned enough German to have a pretty good idea what her parents were discussing behind her back. At 16 she came east to Saint Louis to find a new life.

While listening to the choir last night I couldn’t help but think how these kids of the Tuskegee choir weren’t much older than Rita was when she left home. Each singer introduces him or herself with hometown and major. Lots of engineering and animal husbandry students.

“I knew right away she had to be mine,” Joe used to say about meeting Rita. My father-in-law was never a shy guy. They had five kids, Cathy the oldest and a perfect combination of the best of both her parents. 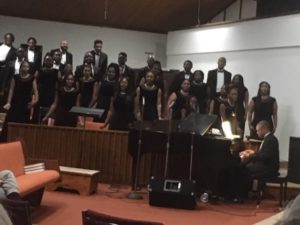 So many different shades of black and brown suggest the singers different backgrounds and origins. From all over the country, only a few hail from Alabama. The three soloists listed for The Negro Spiritual section of the concert were Fernandez Hunter, Patrese Toussaint and Chukwuma Umeugo.

Rita and many of her immediate family would come to Brinktown every autumn for the picnic. Her father had retired to town in a house Cath’s dad Joe had built for him. Louis Bauer never left Maries County, not even for Rita’s St Louis wedding.

The show stopper for the Golden Voices last night, “It Don’t Mean a Thing,” features dancing, soloists, rhythmic chanting, shouting and lots of volume. The audience of maybe 200 parishioners responds with a standing ovation.

The highlight of the picnic for many was the cooking. I remember waiting in line an hour or more to get into the parish hall basement. Then we would be led as a group to a long table with other hungry travelers.  Members of the congregation would pack the dozen or so tables at each seating with platters of mashed potatoes, potato salad and sweet potatoes, string beans, corn, all kinds of salads. Fresh cut tomatoes always. Most everything homegrown.

Fried chicken also filled people up, but most waited for the locally made sausage. I ate two links once and could hardly waddle out to the beer wagon. While waiting in line one year, a little guy from Frankenstein told me he once ate ten at a sitting. Licking his lips and patting his bib overalls, the man smiled thinking about what waited for him in just a few minutes.

Yesterday’s finale, “The Tuskegee Song,” written by poet Paul Laurence Dunbar and musician N. Clark Smith, is more introspective. Local alumni are invited to join the singers. Several do, their street clothes contrasting with the long black dresses and tuxedoes of the choir.

After the games of chance, the quilt show and visits to the beer tent, the typical Brinktown Sunday usually ended with a walk down the hill to visit the parish cemetery and family graves. Sometimes a riding club would leave their horses tied up, tails twitching away horseflies, while their riders strode up to feast.

The Holy Guardian Angels church itself stands across from the parish hall. The modest brick sanctuary wasn’t used for the picnic. People would go inside to get a break from the weather, or just sit in the quiet to enjoy the silence or a visit with distant relatives and friends.

Cath and I stopped going to the picnic because the annual Oral History Conference is most always that same October weekend. Luckily music and fun can still be found most everywhere. Rarely is joy as celestial as the Tuskegee Golden Voices or afternoon bingo at the Guardian Angels parish picnic.