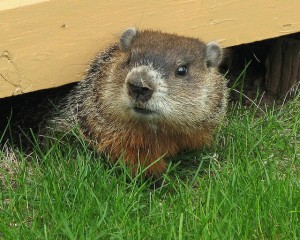 Early mornings in late August offer the few moments of coolness we’ll experience for the day. I’m sitting on back deck enjoying the crows’ complaints and watching for our groundhog.

This ornery pig showed up one morning from a hole dug underneath our neighbor’s garage/shed. He’s eaten three young brussel sprout plants. What more can he or she do? Plenty! Our neighbor in Rolla used to hide out near his soybean field to try to pick off these woolly marauders. I didn’t blame him.

They get big fast. Heine grew up on a farm and had a no-holds attitude to pests. Or what he regarded as pests.

Heine would kill box turtles he found in his garden because they would eat the cantaloupe, etc. He also shot hawks whenever they got near his place. That was just a habit from the old days. I would debate him on doing this kind of thing. He truly loved nature and his huge farm where the Big and Little Dry Fork comes together in Phelps County.

Heine loved nature on his own terms. He wanted to control it, especially the creeks, and and found a way to battle the Corps of Engineers about his management of stream banks.

He had several boxes of arrow heads and other tools found on his bottomland. Heine also had more tools than anyone on the road and liked helping his neighbors when possible.

What would he do w/ our present groundhog, the citified pest of probably many gardens? I wish he were still alive and living nearby to help out!

I was not too surprised to see this fat character, too big to be enticed into our squirrel-sized Have-A-Heart trap. When I set it with some cantaloupe pieces, he ate them apparently but didn’t bother going inside. Instead, the next morning I found a possum who snarled and hissed at me. He got a ride still in the trap to Fassnight Creek near the high school and scampered downstream asap, not bothering to sull or say thanks for the trip.

When we lived downtown three years ago, one spring day I found a groundhog living behind our old dry goods store loft building. I thought that was sort of neat, maybe because I didn’t have a garden, missed touching the soil and relating in diverse ways with an Ozark landscape. This present ground hog visitor is not so neat. Sometimes a neighbor with a gun can be your best friend. But maybe the city Pest Control officer will know how to relate to a chubby neighbor with a selfish attitude to gardens nearing their peak.