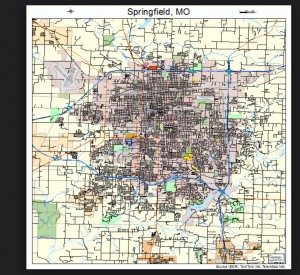 Really looking forward to Loring’s graduation shindig out at a friend’s place. Cath assures me she has the address on her iPad.

It’s dark, pitch black and spooky. The iPad has no Wi-Fi connection to show the way. Clicked the blue address but it took us to the wrong road apparently.

I get pissed, at the iPad, at Cath, at myself, at the rural roads around here.

They’re almost all called ‘Farm Road something #’, which is sort of a misnomer. Springfield doesn’t have many farms close to town anymore except giant showplaces or patches for an old guy to escape the house & chores.

No fun navigating on roads with no real names in the dark. I punt.

The same thing happened in Rolla when we lived up that way: most of the rural country roads were given the prefix ‘County Road something #.’ This was necessary for our health and well being allegedly.

Ambulance drivers get lost easily enough finding driveways by big trees near a white fence that you can’t miss because used to be a barn there had a number tacked up but it’s gone now. Everyone out here knows where we’re at. How many gorgeous road names have been lost in the Ozarks in recent years due to some imagined efficiency in replacing granny’s directions?

Our two-mile long road had been called Windy Ridge Road because it was one. Ended near a bluff with a big ol’ Indian burial cairn. Previous residents had vandalized it so all that remained was a donut of big stones. These early settlers must have been looking for some imagined buried loot.

Windy Ridge Road gradually ceased to exist after the name change. One Halloween, some bad boys stole all the pews then later burned down the old church on the corner that also served as our place to vote.

It had been pretty much abandoned though a guy from town tried his best to keep it up. And some neighbors did mow the lot once or twice a year.

Occasionally we had a picnic there. Big old white oaks kept it cool.