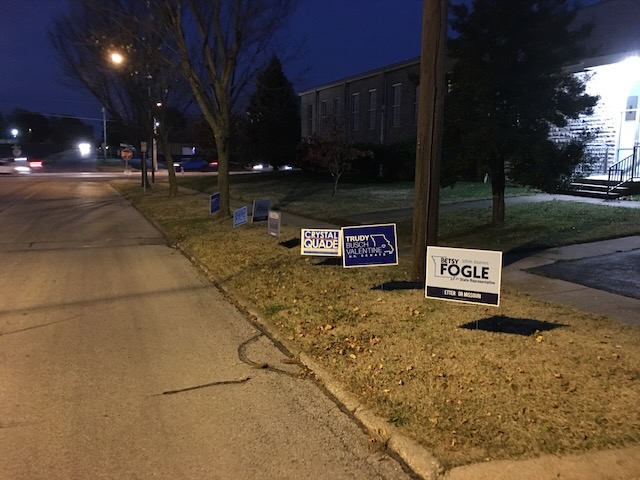 Probably it was her daughter helping this elder with a metal walker. Slowly they rounded the barricades toward we 16 election judges squirming on hard seats. She didnt want any help voting.

It could have been her neighbor. Several neighbors came together on Election Day.

She shooed her helper away. Then she bent over the notebook where I pasted a label giving her address and what ballot type she should receive for her neighborhood and electoral races.

Her companion reached over to help steady this ladys hand. The elder brushed that assistance away too.

Used both hands to hold the pen. As gnarly as hawks claws, her fingers guided the pen to sign for her ballot. Her letters were as clear and sharp as the skies last Tuesday, nippy and rainy.

A brief smile flashed across their faces when I reminded the two women to be sure to take their stickers. Then they slowly made their way toward one of the dozen round tables to cast their ballots.

Everyone gets a kick out of that. Remember to wear your sticker saying I voted.

Awesome, theyd say. Or, cool! Wear your stickers. Be proud you took the trouble on a bad day to come out!

Not that many folks did come. Less than half who registered took the trouble to vote. I spent almost a year in Vietnam in a stupid, illegal war so you could vote. Millions were killed. Why do our politicians make it hard for people to vote?

It should be a national holiday. No one should be required to work on Election Day. Its that way in other countries. It is hard enough to make a living these days. It shouldn’t be hard to vote.

We toiled mightily in the guts of American democracy Tuesday at one of the busiest voting places in Missouri. This was my first visit to the innards of elections. Its the last time that Richard Struckhoff, Greene County clerk, will oversee this process. He and his staff did a great job, from what I could tell.

We rented Remington’s for the 2012 presidential election. It was then the busiest election site in Missouri, Struckhoff said when he visited our site. We only had eight poll workers available then to handle four times as many voters as you will likely see today. The line stretched out the door and all the way around this building at 6 a.m.

One of my co-judges told me a friend had been one of those poll workers in 2012.

She said the line never stopped, they hardly had a chance for lunch, which she took when using the bathroom, he said. She said this was her first and last time to work an election.

The co-judge and I agreed God must have been out there assuring several hundred people would visit us each hour. We were never bored. Always amazed with the gumption from at least some of our fellow citizens.