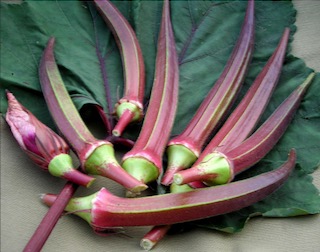 When struggling through teenage-hood I helped my family eek out a living in the gnarly wilds near the exclusive St. Louis Country Club. A group of my buddies and I fancied ourselves to be hillbillies. Rather than help our families grow crops or make moonshine, we mainly encouraged the growth of our parents grey hair as we exploited the backwoods country of Ladue and beyond.

On a typical weekend one of us would borrow dad’s sedan, pick up the others, head over to East St. Louis to buy beer, then back west on Highway 40 to old twisty roads with funny names like Ossenfort and Wild Horse Creek where we could drive fast and eventually get stuck exploring some farmer’s field. 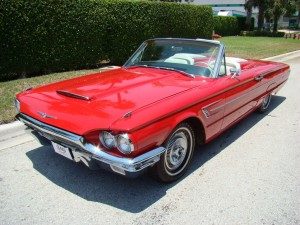 1961 Red Ford Thunderbird 2-seater. One just like this plays a role in this story. Photo credit: http://www.iagclassics.com

I still remember vividly how a kind farmer used his tractor to pull a borrowed from Dad bright red new Ford Thunderbird out of a ditch at midnight along the infamous State Route T near St. Albans. That auto could be worth $100,000 today if it were still in mint condition as it would now be over 50 years old. But it was in far from mint condition after that night’s adventure.

These memories cause a certain embarrassment, but also pride because none of us lost anything worse than innocence. We managed to visit the old Grand burlesque theater in downtown St. Louis to see the fabulous Virginia ‘Ding-dong’ Bell perform on one expedition, but later also the venerable Souland and Union Farmers Market.

Food was a big part of quest. Hamburgers, donuts, Fitz’s root beer and various drive-ins all attracted us. A few of us liked to make Caesar salads at one guy’s home after a night exploring the wilds of suburbia.

One of my favorite places to visit was the little community of Gumbo way out Highway 40 near the Missouri River. If I remember right, this was mainly a group of black farmers who sold all kinds of truck patch vegetables along the highway.

I returned several times after Vietnam, while I was going to grad school at St. Louis University, living in Lafayette Square with friends and helping rehab houses. Making big stews was my thing. I liked all the colors, flavors and textures.

Late summer really brings back these memories of cooking without a recipe, just throwing together piles of veggies and organic brown rice with cheap wine to wash it all down. This is in some ways the origin of this recipe.

September brings the best out of the garden. Recently I was at the new, totally amazing Springfield Farmers Park buying veggies with my wife Cathy, who constantly has to hold me back from buying too much. But I couldn’t pass up green tomatoes from Milsap’s farm. You don’t see these earlier in the season. Nearby a farmer was roasting Anaheim peppers just like he was in Hatch, New Mexico. Couldn’t pass up a sack.

When we got home a friend gave us a huge sack of okra. I suddenly realized we had three items that would not be available again until maybe next September. Is it really necessary to have fresh peaches in February? I like looking forward to Missouri peaches in July. It’s okay to freeze or can some, but they mainly bring back memories of summer and how good fresh things are in their season.

So this is the best and only time to fix The Big Three.

First, you cut one or two big green tomatoes into thick slices, dust with corn meal and herbs and fry in an iron skillet. 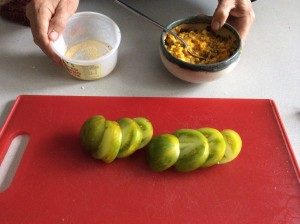 While they’re getting toasty, chop your okra into ½-inch rounds and coat them with the cornmeal mix. 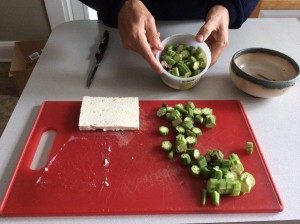 Okra chopped and ready to saute.

Remove the tomatoes and start frying the okra. 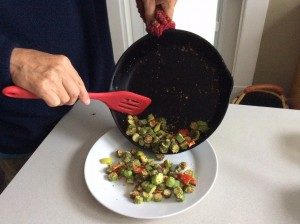 Okra crunchy ready for the next step.

Break eggs into a bowl and beat lightly; we usually add tofu and tumeric. When the okra’s crunchy, put the green tomatoes back in the pan, pour the eggs over these two goodies, add salt, pepper and any additional herbs you desire and finally lay the cleaned smoked green peppers over all. 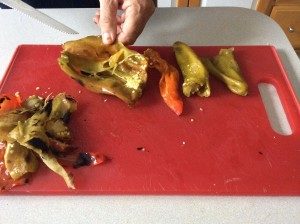 You can add a little cheese or pesto or colorful hot pepper sauce on top of the pile if desired. Cover and cook slowly at low heat until the eggs are firm. This day, we had a little feta which we sprinkled on top. Don’t be afraid to be creative. It’s a real down home and healthy way to start your day. 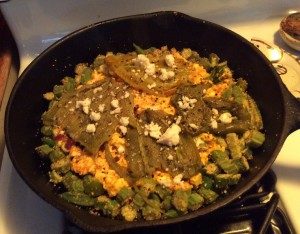