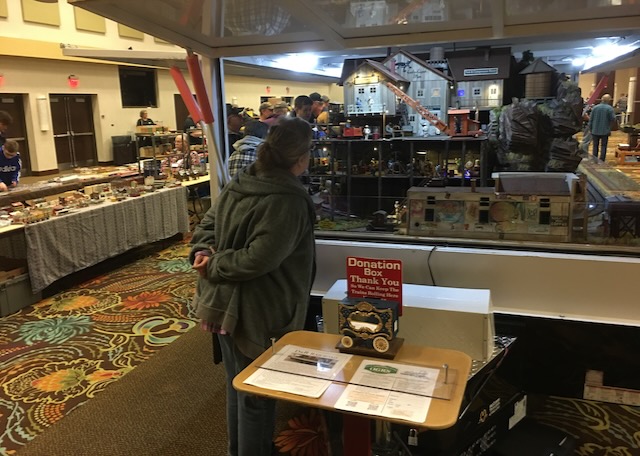 What I remember from a local train show yesterday was the fleam. I hadn’t seen once since running the Ozark Agriculture Museum.

It’s a simple device. They were used to induce bleeding in belief bad blood could be eliminated and health restored. The procedure almost cost the life of our first President.

Luckily medicine has become more sophisticated. Now they just bleed our wallets instead.

Matthew Groves, a local pastor, was selling a collection of antique tools at the Ozark Model Railroad Association exhibit. Usually he has train stuff.

About 100 exhibitors had “railroadiana” to sell. The raucous show totally amazed me with its cheery enthusiasm and many wide-eyed kids of all ages.

This motel hall has hosted banquets for our council of churches, medical, political and other conferences. Train folk crowded the room with operating layouts, train sets and other hobby equipment for sale or trade.

Most of the crowd were old duffers like me or young families. Lots of guys wore vests sporting the badges of railroad lines that no long exist, especially the Frisco. Springfield headquartered the Saint Louis-San Francisco Railroad (“The Frisco”) and still has a great Railroad Historical Museum in Grant Beach Park with one of the largest steam locomotives (the Baldwin No. 4524 from 1943) ever manufactured in the U.S. It’s a great amateur museum with lots of cool stuff.

Running errands to pick up birdseed from the Audubon Society, I luckily heard the train show featured on public radio KMSU. I loved trains. Their massive power and clanging belching smoke inspire awe ever since Dad took me to see the last steam engine run by the old Wabash line in the ‘50s. Cath and I have even ridden Amtrak to both coasts.

Most mind-blowing yesterday: Tom DeGeere and Dennis Rayon’s traveling 7’ x 14’ model train layout built on a heavy tandem-axel trailer parked at the rear of the hall.

“It took us over 1,800 hours to build last year during Covid. We both worked eight-hour days to get it done,” Tom said while standing by the popular display, which models a mining village built from scratch.

Three trains run through 250+ humans and critters, mansions and mountains, all to large “G Scale,” the preferred size for what’s known as garden railroads. Built to go outside, these displays take total dedication as did the D & R Railroad trailer. I couldn’t help but slip a buck in to their donation box.

Equally fascinating were other tiny scaled rail models just as intricate as the D & R trailer. Some fit on a card table.

Later, as I drove up to get birdseed at our local Watershed Center, I recalled a somewhat similar show I’d seen at the local fairground. The gun show attracted a much larger audience and more exhibitors. Springfield has several large gun shows each year.

This gun show seemed not so friendly. It had similar large displays with owners selling pieces of their collecting hobby. While I’m not opposed to folks having guns at home, all the recent shootings have me freaked out. I don’t like seeing dudes carrying guns in Wal-Mart, or anywhere.

As I consider the two kinds of shows, I appreciate each as different forms of American wishful dreaming. Many towns of all sizes host similar events. One thing I appreciate about gun shows is that these items represent real monetary value. Folks can make serious money trading firearms. There’s fascinating technology, history and lore, just as with railroads.

I’m sure people can make even bigger bucks selling rare guns than model trains. Nothing the matter with that, it’s just a fact of life. Car shows are like gun shows in having neat technology and big bucks, but without deadly angst. It’s maybe one reason Congress has not been able to develop legislation to control automatic, high-volume firearms.

People make a lot of money trading these things while stoking public paranoia as an indirect result. Making money must be our highest civic religion, along with our ‘don’t mess with my gig’ mentality.

No one seemed to be raking in big bucks at the model railroad show, it was for something else.

Leaving the D & R trailer, a visitor said to Tom DeGeere that his months of working on the model railroad trailer must have been as expensive and as time-consuming as raising a child.

“It’s like building a train layout, you never expect to make any money from your hobby or from raising a kid. It’s just a pay-out year after year,” the grey-bearded visitor commented.

“That’s all we’re trying to do,” Tom replied. “Maybe break even on our expenses and share our love for trains.”