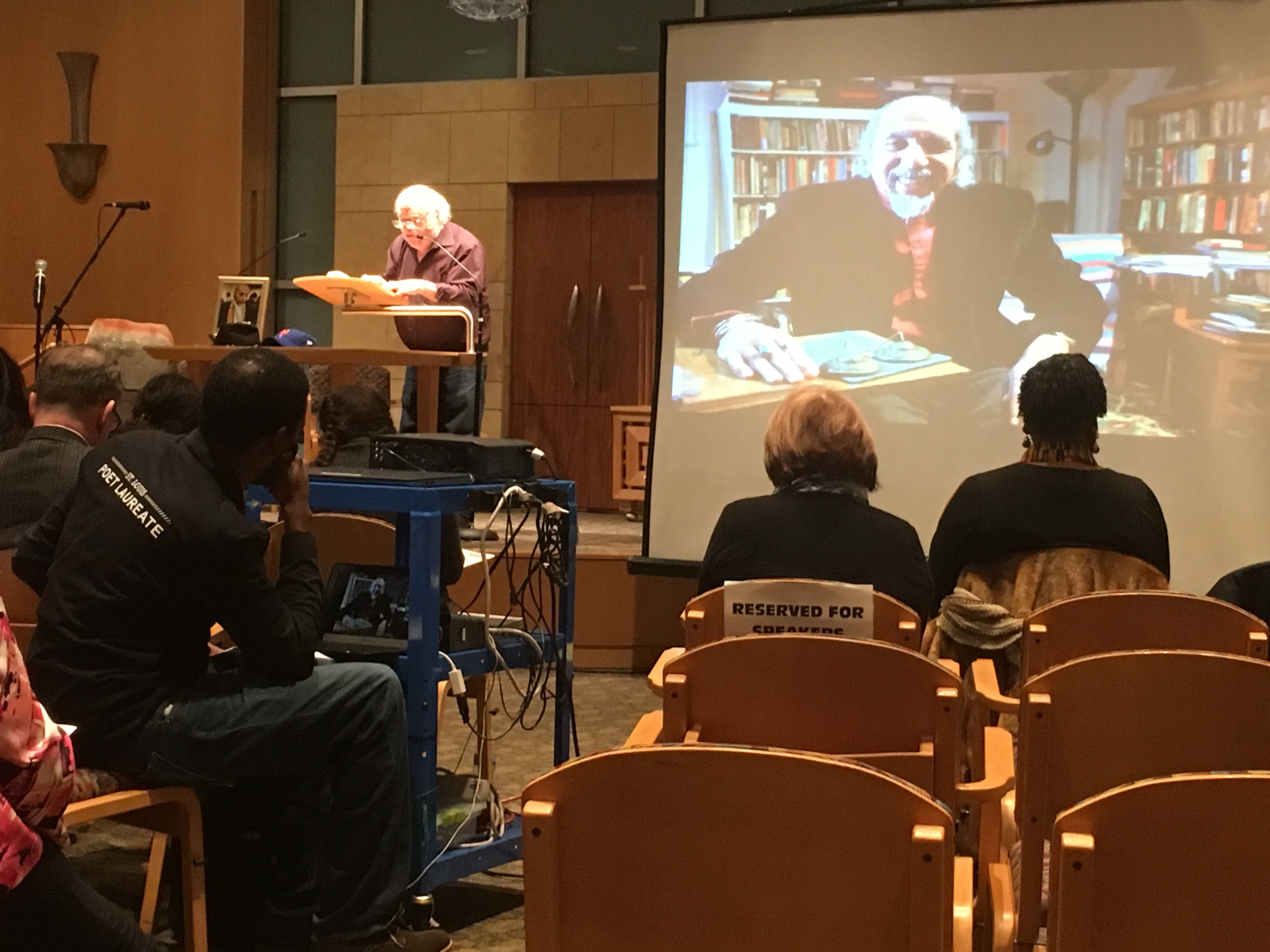 Let’s start with a first cousin, Joseph Coffino, who came all the way from Los Angles to be in St. Louis for Michael.

“We always loved baseball,” Mr. Coffino said. “When we were growing up in New York City I remember once we went to a Dodgers-Giants game and sat behind a guy with a big fedora. I got some peanuts and started breaking the shells and putting them carefully around the brim of that fedora. Michael watched for a while then, ‘Give me some of those peanuts’.”

At the end of the game, the hat was well covered with shells. When the man stood up, they fell all over like snow.

“He chased us both but never caught us!” We all laughed. At the end of his tribute, Mr. Coffino reverently brought a baseball hat and a black fedora to the podium and poured shells over them. An even bigger burst of laughter and applause. What kind of guy is this poet and lifetime baseball fan? We had many surprises.

Late January usually brings snow and cold if not a polar vortex from the North into the Ozarks. Yesterday the grip of winter quickened around St. Louis.

Cathy and I had come up to celebrate the city’s Poet Laureate, Michael Castro. He had died a month before. His memorial was going to be an epic event Howard Schwartz, fellow poet and friend, assured us.

Howard and Michael were best friends. Howard was right. This was a 3+ hour poetry reading and party. Over 200 people, most stayed to the end, maybe the best part.

The only problem– Michael was not there to enjoy the festivities. But he knew what he was going to miss. His stamp was all over what happened. It began early with food a church had prepared. Some donated, many friends helping serve so we could all relax, talk and watch the snow come down as the big hall gradually filled with somber, but smiling faces.

Mostly his poetry filled us up. If it was not Michael’s words, it was from his family and friends. One of the most amazingly happily awed crowds I’ve ever experienced. Besides enjoying this pure poetic joy, I learned how a complex happy guy from New York became Michael Castro, the city’s first Poet Laureate and an ambassador to a world we all hunger for.

About 30 people presented poems. Most read Michael’s, a few read pieces they’d written. Native Americans chanted and drummed to welcome us. The president of the St. Louis Board of Aldermen explained how Michael had been the unanimous choice to be the city’s first official poet, because he was known to do so much to bring various communities together. I especially enjoyed the East St. Louis Poet Laureate Eugene Redmond and the Soul-ar System Ensemble, which included four skilled presenters chanting, singing and dancing with Eugene reading.

Diverse rhythms and harmonies echoed through the afternoon because traffic had about stopped with this sudden mini-blizzard. If you didn’t arrive early the roads got slick. The parking lot at Central Reform Congregation synagogue was full an hour early. Musicians and video crews had to set up.

I was sitting behind a young man who had maybe the hardest job: keeping digital slide and video programs going on schedule. This was not easy because the various performers/speakers had different time frames and images that might work with what each had to say. And about every hour there was a 10-minute video presentation, some with family members, most with Michael speaking apparently a few days before his passing on December 23. If I heard Michael’s wife Adelia Parker correctly, this digital program was played on a laptop by one of their seven grandchildren. I didn’t get his name, but the digital show went on without a flaw and provided another way of experiencing this poet’s world.

I wish I had known Michael better. I met him through Howard Schwartz who I knew at college. Then after I had been drafted to go to Vietnam and later begun working on the newspaper one summer in Rolla, I met Howard again in the Ozarks. He was housesitting at Jim Bogan’s place outside town. As usual, Jim had retreated from Ozark heat to his family compound in Michigan. Howard was writing and finding every swimming hole he could within 20 miles of Rolla.

Over the years I’ve tried to stay in touch with Howard. This means a trip to St. Louis. Like most hillbillies I have mixed feelings about driving into the city, so many crazy energies. But these poets seem to know how to handle it. Howard and Michael wanted to go out to find some decent Chinese food whenever I came to town.

If no time for food and talk, my friend from high school, Fred Tompkins would meet me at a cool little place called Tavern of Fine Arts to take in some free jazz. Often Michael was there chanting, rapping and singing his poems with the band.

Free Jazz captures the feel of Michael’s snowy send off. I haven’t experienced such a harmonious group of so many different ages and races in a long time. When I got out of the Army I worked for a civil rights group in the city, Block Partnership, that tried to bring together black and white groups in the city and suburbs. It lasted a few years, but the local United Fund voted not to support the effort and it died an early death. Block Partnership never quite got its energies going.

Maybe jazz and poetry can. Michael’s son Jomo offered a touching final tribute to the evening as the snow slowed down.

Jomo joked about how strange he felt as a kid when his parents would give him books as Christmas presents. Now he sometimes gives his children books. When Michael married Dee, his African princess, in his words, her children became his just as much as his with his first wife. The family grew larger without a sense of ‘his kids’ and ‘her kids’.

This feeling of family expanded for Michael’s memorial. As Jomo said, “I always knew my father was there for me.” Maybe this is what attracted so many people to stay so long through a snowstorm for Michael Castro. His presence through words and music, friends and food helped create a space which felt like the old Winter Gardens or Steinberg skating rinks where people would swirl around on a winter afternoon and know we were all there to have fun, to celebrate what a city could be if people really cared for one another.