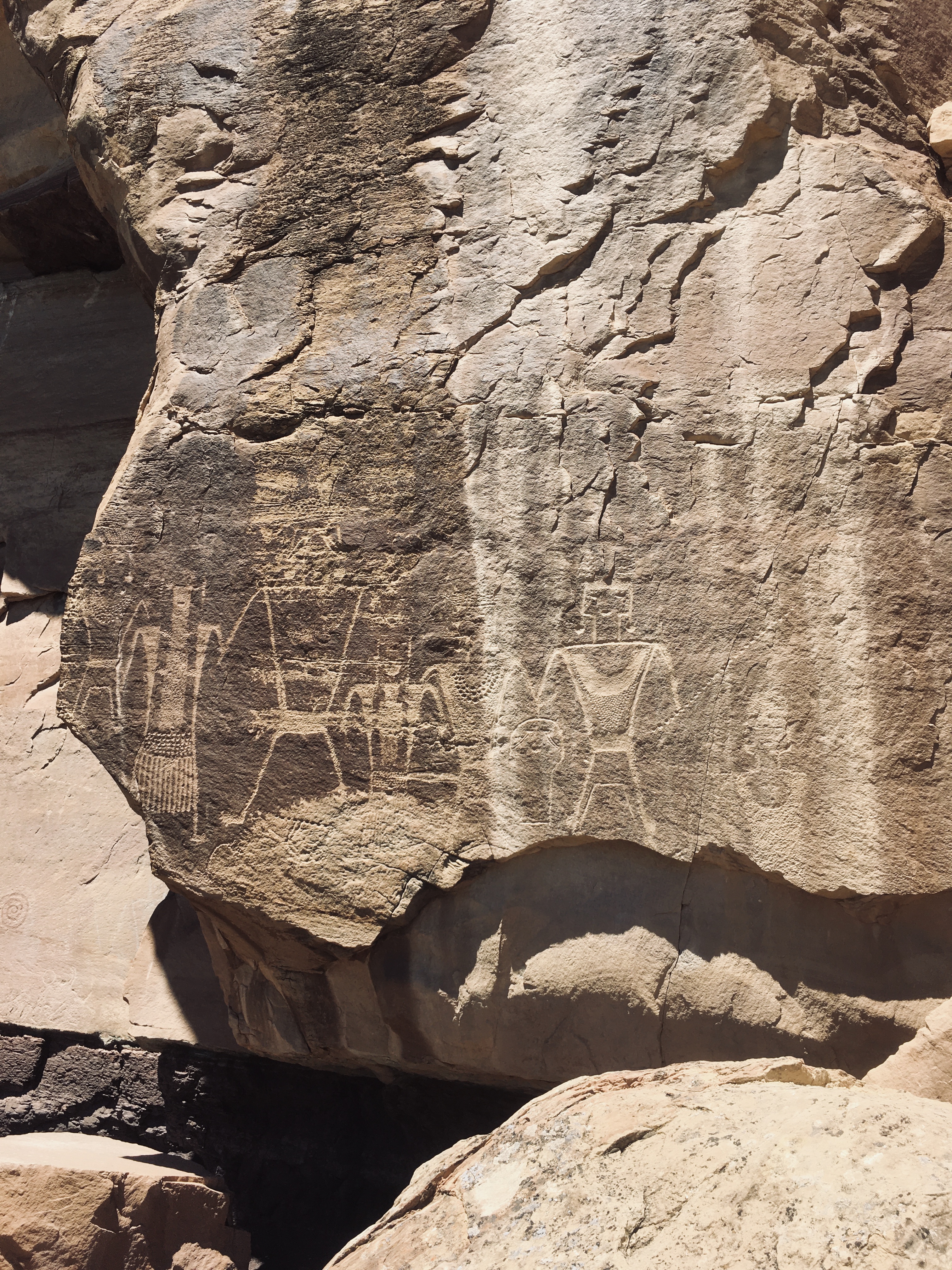 All winter into spring we’ve wondered if we could trek to the desert. A few weeks before going one couple dropped out of our crew fearing travel from Oregon during pandemic. Six of us did make a mid-June 1,000+ mile Ozark-Utah trip to experience this stream named for a Native American tuber.

Was running the Yampa worth energies expended, a grand or so apiece, much less exposure to Covid 19? I’m typing away on the laptop as Cath drives across Kansas while recalling highlights of the week’s adventure.

Wind blowing hard, I feel we’re on a sailboat tacking to windward. It reminds me of the fourth morning. Almost as hard as he could row our raft, the wind blew Pepper Jack back upstream.

Pepper was the main reason we made the trek. His second year as a river guide, his palms feel rough corncob tough. Not easy, yet a cool macho-man job.

Anne and Robb, his proud parents, were the informal leaders of our group, which included Diana and David, also Columbia MO residents and scientists like Robb. Pepper’s our godson.

Kansas valorizes our trek. This state always amazes, especially the Garden of Eden, Grassroots Arts Center and Brant’s Butchery in Lucas. Unfortunately we only had time to buy a pound of Bohemian bologna en route to the Prairie Dog State Park, where we “slept” on a wood platform in the back of our truck.

Not going into places—gas, food, museums– constituted our main Covid defense, along with masks and sanitizing every object w/in arm’s reach. We brought along a cooler of vittles and spent the next night out along the Cache la Poudre River, Colorado’s only protected Wild & Scenic River and a lengthy historic district with traditional cabins.

When we reached Steamboat Springs, a young woman stood by the sole entrance at the Safeway to take our temperature w/ some kind of gun before we could enter. We wore masks, like everyone all around town. Not so in Vernal, where our outfitter, Adrift Dinosaur, has their shop.

Our put-in June 10 was one of the first commercial trips allowed since the reopening of Dinosaur National Monument in early June. Covid has hurt tourism all over.

It’s a shame. Lots of people wrecked by these crazy pandemic weeks, but Vernal has had just a handful of cases, so it’s a safe place. Relatively.

My sisters back in the Boston area worry about disease. The Eastern Megalopolis has seen thousands killed by Covid in the last five months. Good sense to be cautious.

A warning truck has just passed us, followed by a semi hauling one huge wind jenny blade at least 100’ long on a special carriage. Thousands of these 400’ high, three-bladed windmills fill Kansas and my heart with hope. So damn windy here! We’ve seen several semi blow-overs.

Colorado’s sprouting more PV. Even huge arrays planted on some cloverleafs. But still the solar revolution may be the slowest in history.

“It feels like we’ve been driving forever!” Cath says. “I’ve been behind the wheel for an hour, and Hays never gets closer!” The Jayhawker must be the longest state, but I love its rolling hills especially on the smaller highways we try to use.

Western towns amaze because each seems splendidly isolated, proud, offering something unique while struggling to form a bedrock of traditional American values.

We had a chance to visit the Uintah County Museum in Vernal. Great exhibits on early mountain railroads, the mineral Gilsonite and American first lady dolls, etc.

Equally amazing for a free day in Vernal: visiting Jean McConkie McKenzie at her family’s ranch up Dry Fork Canyon. Still privately owned, the property has an inviting parking lot and trails along 200-foot high sandstone cliffs. Huge Fremont-era petroglyphs of animals, people and gods shimmered in bright sun, then Jean showed us her family’s collection of historic artifacts in funky outbuildings. We donated $10 in the old ammo can, so neat of this family to allow visitors. 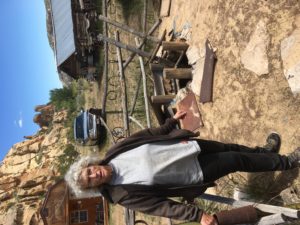 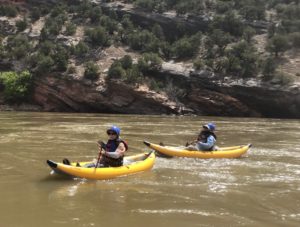 The above is secondary. The Yampa’s rocky scenery left me feeling like a flea in the Sistine Chapel. I didn’t expect this or anything because the last months I’ve been revising an oral history collection with little time for anything else. I thought it was going to be scrubby desert.

I should have known rapids would blast me every day. I didn’t like that. I got bored sitting in rafts while the guides had all the fun challenges. Bored’s not quite right. Numbed by the towering geology. It’s like being in Manhattan and not knowing what’s happening if you don’t know your stratigraphy and you just have to keep driving uptown with no time for stops. Some of the time Robb explained the underground drama of folds, synclines, etc. Also luckily there were chances to paddle inflatable kayaks through the rapids, much more fun than sitting like a clueless tourist. Once Pepper had to throw ol’ Stub a rescue rope, he almost missed an eddy. Thnx man!

This was the third commercial trip I’ve taken in the West, including two weeks down the Grand Canyon—also totally awesome but eventually sad when the effect of the Glen Canyon Dam on riparian ecology becomes apparent. Cath and I also had a chance to do four days down the San Juan in southern Utah with an expert birder—a beautiful smaller stream with varied habitats. The Niobrara also – a touch Ozarky, super!

The gold standard for me of Western ventures was a four-day hike into Grand Gulch, a wilderness north of the San Juan, about a decade ago with friends. Going with friends is the best. That’s how we float in the Zarks, except for the occasional short upstream adventure.  On a commercial trip it’s an effort to get to know the rafting guides. Millennials really don’t care who you are; they’re figuring out their own lives. And busy as hell, schlepping gear on and off, especially on this Yampa trip: they not only had to cook all the food, they had to serve our plates, take our temperature daily, do the dishes, all the time wearing masks and gloves. I can imagine the food thing was not fun, but they stuffed us well. Pepper Jack has sharpened skills learned while working in bar-b-q in high school and elsewhere during college.

Be sure to give a generous tip, an unspoken message. Can’t blame them because they work so hard. But apparently one large family group on our trip didn’t give a nickel. 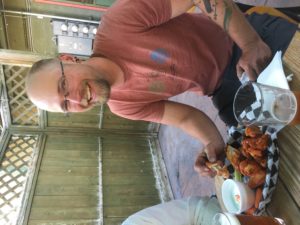 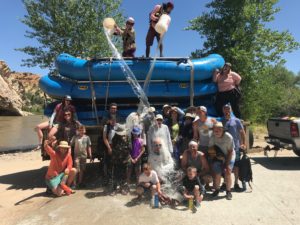 Making our trip mindful, our bubble agreed ‘to read’, via Audible, All the Wild that Remains: Edward Abby, Wallace Stegner and the American West, from 2015, as we drove out. I found David Gessner’s odyssey in search of these authors’ families, friends and roots fascinating, as did Robb and David, but the women were not so compelled by his literary sleuthing.

Gessner has one chapter dealing with Vernal’s recent petroleum fracking boom and the environmental history of the Yampa. A proposed dam led to an expansion of Dinosaur National Monument. It’s not as popular as the Grand Canyon, thank God, but tied to it through water politics.

On our last lunch one of the guides, Annie – who taught recreation policy at Colorado Western University and grew up in the Saint Louis area — gave a heartfelt explanation of the importance of the Yampa. As one of the few unimpounded streams in the Colorado River basin, it serves as an environmental baseline. More than that, being on this river is a gift few are privileged to enjoy much less understand to any depth.

Being there I was overwhelmed and speechless. I didn’t want to leave. I couldn’t do small talk. Just draw, write and gape. Take in the energy from massive red rock. I didn’t want to come back to muggy Missouri, masking regulations, blood-thirsty Ozark ticks and this noisy city. I wanted to stay in that camp where Cath and I slept out under the stars on our night below Warm Springs Rapid, the biggest whitewater we ran. Becoming one with streams, heavens, fellow river rats, overhead eagles, hungry skunks and timeless canyons makes rafting an existential joy all should try.

Luckily we were able to look forward to seeing a few old friends while beelining back, mainly the Ferndog at his mountain trout retreat. When I saw Cam Powers in Boulder yesterday and told him a bit about our trip, he grinned like a giant red-headed raccoon.

“Did you run Warm Springs?” he asked.

“Pepper Jack rowed our raft through it like a pro.”

“Cool! We once spent a month on that river and the Green,” Cam smiled broadly. “That was a long time ago when everything was still groovy… before it got so popular and the National Park Service had to start controlling the scene.”

And before Covid, giant SUVs, climate change and a chubby orange-headed buffoon made the world a bit more crazy. 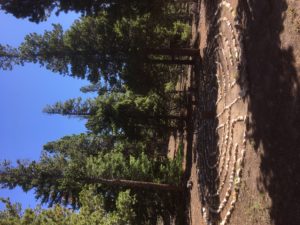