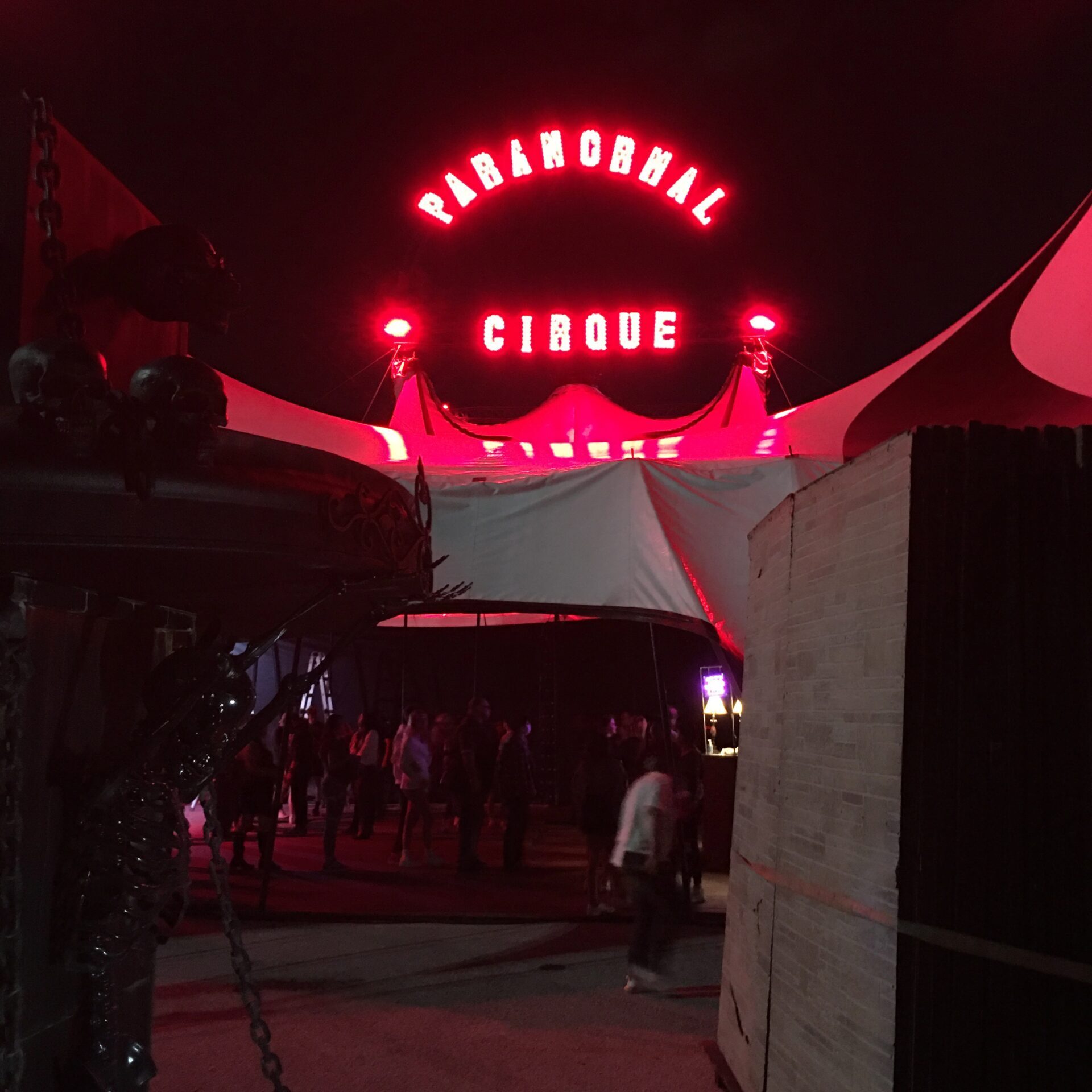 What drew us here, to this scruffy parking lot in a mid-American shopping mall on one of the last nights of summer warmth? Was it the magnificent tent? The luminary appellation? The possibility of something extraordinary right here in our usually sleepy Ozark city?

I woke up at 4 a.m. today pondering our visit, but also distressed by howling winds disrupting vestiges of dog day heat. After taking a few notes I was able to fall back to sleep. With the storm now blown out, I try to make sense of what demands introspection.

You and Kathleen were slightly pissed off. I can’t blame you.

After all we are still in a pandemic that has killed more than 700,000 Americans in the last year and a half. Things may be getting a little better in the Ozarks, but not much. Hospitals still crowded, barely half the population has taken a Covid vaccine. The circus advertised on their website they were requiring visitors to wear masks to be admitted.

“Looking at these people sort of makes me sick,” you said. “Most of them are teenagers. I doubt if many of them take the pandemic seriously or bother to get vaccinated.” Hardly anyone was masked.

I had to agree with you. Generally I like crowds, feeling energized by the varieties of my fellow humans. But the circus crowd seemed struggling, semi-lost Goth kids mainly interested in taking selfies in slightly bizarre togs. Most everyone was overweight, typical of the Ozarks these days.

“Why did they advertise that no one would be admitted without a mask,” you asked. “It’s to get older suckers like us to make us think they were being careful to protect people’s health.

“They didn’t stop anyone without a mask. They didn’t do social distancing with seating in the tent! They got as many people in as they could possibly fit!

“Most of these people look like they’re not too careful with their own health, much less anyone else. What a joke on us this is!”

What initially attracted me were the half dozen brightly painted semi-trucks circled around two huge Space Age-looking tents spiked into the north end of Battlefield Mall. The name initially seemed creepy and juvenile.

I stopped the site by while getting some exercise with Cathy on our bikes. The guy in the ticket office explained this was their last night in town. He spoke with a vaguely Eastern European accent, somewhat like the Yugoslavian refugees we had met in Marseilles years ago. I wish I had asked him more about what kinds of acts they featured. But like a typical polite Midwesterner, I didn’t want to appear pushy or too questioning. I thought their website could explain it all.

Also I remembered a few circuses I’d seen in the past: in rural Mexico where two men held up a heavy rope that supported a beautiful trapeze artist who sort of danced as she twirled to recorded music; Chinese acrobats in Chengdu; the Big Apple Circus somewhere Back East; King Reed’s burlesque show at a county fair in Maine; the police circus in Saint Louis when I was a kid.

How can a traveling circus make it these days? What kind of acts can they find now?

Any number of friends would get a kick out of this scene, I felt. But you Garland, were the one call I made. I don’t know anyone else who can juggle, ride a unicycle or make people laugh as much as you.

We arrived at the Paranormal Circus an hour early because they said a pre-show would start 45 minutes before the performance. We walked around the big top, which seemed larger than a football field and reached up into the evening sky like a castle in a dream. Nearby dozens of RVs and trailers for the circus workers stood in neat lines hooked up to power cables for these homes on the road.

Finally we were admitted to the preshow, which turned out to be scraggly characters in rubber masks cackling loudly and running a chain saws in a dark corner. Once in our seats the preshow involved costumed venders selling cotton candy, popcorn, soda and scary masks.

As the tent filled the music got louder, the atmosphere grew smoky, the buzz of the audience filled us with anticipation.

But seeing the crowd made you more nervous and apprehensive. This would be the basis for what’s called a ‘super-spreader’ event, a ground zero for unhealthy virus to find new human sites of interest.

“I’m wondering if this is right for us,” you said to Kathleen. I could tell the direction this was going. I was impressed. You two discussed your feelings about the scene with a calm sense of what made you most nervous about the crowds in the tent.

You and Kathleen walked out before the circus even started.

The main reason I stayed is that I’m too cheap to give up on a $30 ticket. Also I had a good M95 mask my sister had sent a few months ago. I knew I was taking a chance to stay until the intermission, but I was curious about the show. I’ve never seen much of the paranormal side of things.

You said you wouldn’t mind waiting and walking while I saw the first hour until the intermission. Thanks so much for your patience. Hope we all keep healthy for the coming weeks!

What did I see which may yet seem worth risking my health, my wife’s well-being and even friends’ and public vigor and future strength:

– A girl suspended in a trapeze hanging from a motorcycle traveling along a high wire as the driver also did tricks and twirled his bike in gyres while exiting;

– A boy led around the audience with a chain then locked in a cage by a wizard who comes to the center ring allowing the lad to display his contortionist skills;

– The Black circus master who wandered into the audience to find a volunteer to be part of his knife-throwing demonstration (no knives actually thrown, just slight-of-hand balloon popping);

– A young woman who’s seemingly suspended by her hair while a wire lifts her from a bed to soar and dance on high;

– Another who jumps out of a box to balance on narrow spindles then uses her feet to shoot an arrow from a compound bow to pop a purple balloon.

All of this and several other feats are carried out with flashing lights, blaring music in many styles, with roaring applause and hollering from us gawking hillbillies. The half show I saw seemed equal parts Halloween Spooktacular and amazing acrobatics.

More than any feats, I most remember the roar of the crowd at the end of each act. The applause and cheers for each performer seemed totally natural and as eternal as must have been common in a Roman colosseum or a London bear-baiting pit.

As I left at intermission the crew began pulling down sidewalls of the entrance tent and boxing up unsold souvenirs. The next show was nearly 500 miles to the north. A storm had been forecast for 1 a.m. In three days they had to be ready to do it all again outside Chicago.

Was the best act at the circus the audience itself? Except for two or three singles, all the 100 or so fancy box seats at $50 each sold out. We had initially discussed those. Just as glad that didn’t work out, but who was there? I didn’t recognize anyone, which is not typical for a Springfield, Missouri, crowd. Maybe a thousand folks, mostly young.

In the back of my mind I was sort of figuring the economics of the circus, which is based in Sarasota, Florida, and has several traveling versions apparently. But any economic returns of the circus could hardly equal the creative efforts of the crew to perform the acts, move the show and live on the road week by week and season by season. Both circus and audience seem like marginal relics from a pre-digital, pre-pandemic past. These people all seem to love living on the edge.

Maybe that’s part of the attraction of this or any circus. I can’t quite imagine anyone making a living as a trapeze artist, but these gals were doing it. If they can do that, maybe I can do what I’m trying to do too. What’s holding me back?

Appreciating the whole show got me thinking about a recent book, George Packer’s Last Best Hope: America in Crisis and Renewal (New York, Farrar, Straus and Giroux; 2021). His main argument is summarized at the end of the long chapter “Four Americas,” at the heart of the book, page 138. Conservatives tend to believe in ‘Real America’, which is committed to a sense of place and limits; and ‘Free America’, celebrating unencumbered individuals. Packer suggests liberals/progressives on the other hand tend to value ‘Just America’, which “demands a confrontation with what the others want to avoid,” and ‘Smart America’, respecting intelligence and welcoming change.

These mindsets make some sense to me, especially if I read what Packer writes clearly in this short book about the importance of equality. This is the ultimate value, he feels, more important than the four outlooks he proposes as a basic. While I agree that equality is a key value, I feel Packer is a little narrow-minded in regards to what freedom can mean to different people:

Free American always had an insurgent mindset, breaking institutions down, not building them up. Irresponsibility was coded into its leadership. Rather than finding new policies to repair the social fabric, Republicans mobilized anger and despair while offering up scapegoats. The party thought it could control these dark energies on its quest for more power, but instead they would consume it. (pg. 85-85)

How does this relate to the Paranormal Circus? I felt a typical circus-goer seemed intent on sensation and spectacle. It didn’t feel like a friendly crowd, unlike those attracted to our town’s minor league baseball park.

A circus may not a healthy thing at this time during the pandemic. During the baseball season, things looked better. The Delta Variant didn’t emerge until mid-summer. Volunteers were on-hand at the stadium offering vaccine shots to all who wanted. Still many people question the vaccines and distrust the usual public information sources.

But circus can be more thrilling than minor league baseball, especially if it features the paranormal, whatever that may be. We have been living it for a year and a half. Only slim chances of achieving a healthy new normality. Yet, I still believe we can “build back better,” as President Biden suggests.

I need fantasy and new possibilities. We need to appreciate those who can fly on a trapeze, make people laugh and imagine life without limits. Thank you Garland and Kathleen for joining me at the circus. Somehow I hope to pay you back for an adventure that didn’t quite work out as we had hoped. But we may have learned something about caring for one another in these difficult days.