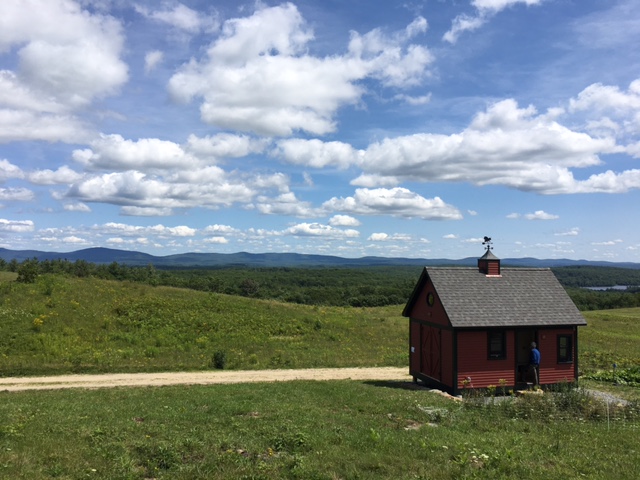 Best burger on the road: Kewpee Drive-inn, Lima, Ohio. A giant angelic baby stands atop the roof of the historic eatery. More dolls on the inside and a sign proclaiming, “Your grandparents probably ate here,” which may be true, as they were all frisky in the 1930s. This was near the end of our trip, we couldn’t pass it up. Or a chocolate malt.

Having planned on visiting family in New England, backing out of initial arrangements seemed to be unbrotherly. Could I have guessed in May that my home town would become the national poster child for Covid-19 craziness a month or two later?

Should Cathy and I have just skipped this month on the road to hunker down in the Ozarks? We would have missed my cousin Betsy Stockstrom VanDyke’s 99th birthday in Amherst, Massachusetts. We talked for a solid two hours! Her kids and grandkids graciously hosted as we discussed everything from venerable relatives to recent weird weather, the West burning while the East remains green.

Maybe we should have just stayed home, to be doubly safe. Tested at three different pharmacies en route, requesting the polymerase chain reaction (PCR) procedure which require swabbing both nasal passages then waiting two-three days for results. Not hard to do, but annoying to schedule while visiting folks en route.        Our goal: to make everyone feel we’re not bringing bad bugs from Ozark stubbornness. We would not have bumped along so many crowded interstate highways if we had just canceled out. But we didn’t have a huge rush, rarely driving more than five or six hours in a day and covering 4,000+ miles.

Most disturbing event: Eerie orange sunsets in Philadelphia and one smoky day en route when we visited in Flight 93 National Memorial near Shanksville, Pennsylvania. At first we thought it was just someone burning old hay at a nearby farm, but it stayed high above us all the way to the city. It was the Cascades and the Sierra Nevada’s immolation.

Gulping down the passing American landscapes always inspires. Who knows what next may burn up, blow away, flood out or urbanely renewed? I may never do such a trip again. Even being lost near Canton, Ohio, on backroads due to construction inspires as admiration as ardent as eating smoked white fish from Clair, Michigan.

The best breakfast: three way tie! My brother-in-law’s homegrown sausage and chicken eggs from Peterborough, New Hampshire; veggie omelet at the Kopper Keg in downtown Cuba, New York, as sweet a town as Cuba, Missouri; or bacon and eggs with my old Army buddy Chris Kerr, who also moved stacks of books to berth a blow up mattress in his home office over the quiet streets of Dorchester, Massachusetts, as we drank good wine and cheered the Olympians proving their skills in Tokyo.

Besides seeing friends and family, this trip had another purpose; to see how the early Ozark explorer Henry Rowe Schoolcraft inspired the poet Henry Wadsworth Longfellow in 1855 to write “The Song of Hiawatha.”

You must remember it’s stand-out lines from grade school,

By the shore of Gitche Gumee,
By the shining Big-Sea-Water,
At the doorway of his wigwam,
In the pleasant Summer morning,
Hiawatha stood and waited…

Of course I’d forgotten these lines too, if I ever knew them. But traveling this summer to the Ojibway reservation in central Michigan and to Longfellow’s home, now a National Monument in historic Cambridge, Massachusetts, I sensed the power of this poem.

Longfellow sold hundreds of thousands of books with his poetry over his long life. One of these was his epic 1863 collection Tales of a Wayside Inn.

Luckily my sister Susan  Primm Thel, who lives near the historic Wayside Inn along the old highway in Sudbury, Massachusetts, was able to reserve us the historic room #9. One of the two surviving 1700’s era room not destroyed in the tragic fire of December 21, 1955, Jerusha’s Bedroom is an ample chamber as large as the average living room these days.

Those two nights at the old Wayside Inn and exploring a little more of historic Sudbury with Susie were worth all the stressful hours of highway travel. The spirits of travelers from some 300 years at the inn must have come out of the ancient oak planks forming the bedroom’s walls, floors and ceiling.

I think I saw visions of a better world. I felt the respect of people who have cared for this oldest inn in America. I sensed what it is to share good times with old friends and family who take time to listen and enjoy one another.