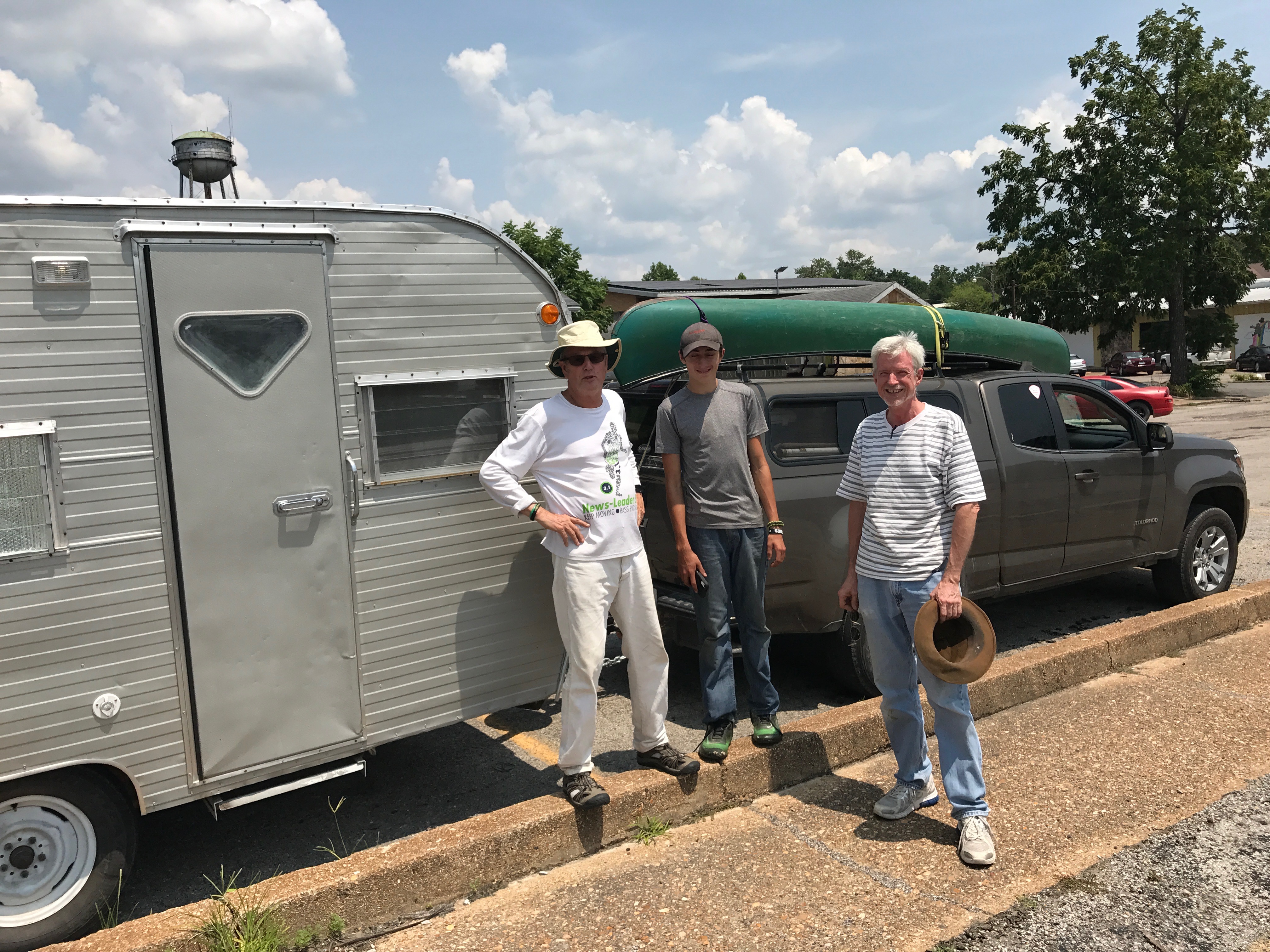 Our foster grandson Tristen Russ died in an early morning one-car crash outside St. James, Missouri.  No one will ever know what caused the accident on August 25, 2018.  Soon to turn 17, he reportedly died instantly when a hitting a tree.

Tristen several times visited Cathy, neighbors and I at the Greenwood Forest Land Trust .  He was a great fisherman, a good student and an enthusiastic worker everywhere including at the Kentucky Fried Chicken in Rolla.  We were with his family for a memorial picnic on September 1st and were impressed by all his friends and the photos and stories shared.

To say the least he will be missed by many. I wrote this story a couple of years ago about one of his visits to our cabin and the river.  The image above is from 2017 and a camping trip to Mingo Swamp.  Alex, Tristen and friend Sam from Greenwood had a great time.

Tristen’s fourteen but acts like a twenty-year old biker. He rarely slows down. Especially at night on an Ozark river.

We’re camping on the Jacks Fork just upstream from the famous Jam Up Cave, one of the largest cavern entrances anywhere. The river makes a sharp turn here creating a mile-long gravel bar on the opposite bank.

I’m valiantly trying to get some sleep on a full of moon in July.

Tristen’s staying up late up to fish. Once or twice I crawl out of the tent to make sure he hasn’t been washed downstream.

“Come look at this,” he hollers, so I crawl out of the bag yet again to see him kneeling on the gravel bank chasing tiny minnows with a beer can he’s cut in half.

The full moon gives him all the light he needs. He’s about to give up on gar fishing. Catching baby catfish seems excitement enough.

This river’s so warm in mid-July I walk into the shallows to watch Tristen pick up small rocks as he searches underneath for the tiny fish. Is this legal? Can he take them home to his aquarium? I’m skeptical. This is a National Park; we’re not supposed to even take home stones, much less living creatures.

But Tristen will do what’s best. He rarely keeps fish he catches. I think he just likes to see what’s in the river and if they will bite.

I crawl back into the tent Sam brought down. He lives in a cabin just down the gravel road from my place. Sam came up with this idea of camping because he wants to see what the short-wave reception will be in this huge open space. Sam’s not sleeping either.

His portable radio brings in Havana and China, but my Mandarin’s not quite good enough to get the gist. Every once in a while he switches to some rock’n’roll station which Tristen really enjoys. More hooting.

“Got a turtle,” Tristan hollers, “Come see.” I roll over. This gravel bar’s far too lumpy.

Tristen’s not much different than his mom who became a bride shortly following her sojourn of two years with Cathy and I long ago. We all learned a lot then!

He and his mom have been through a lot since, but still find their true center, the place where everything balances out in perfect peace, on an Ozark gravel bar. Maybe this explains Tristen’s hillbilly grit and fishing ability.

The next afternoon we walk a trail behind another neighbor’s cabin to another fishing hole on the Jacks Fork. Swim, fish and nap for the old guy. Looming above us a huge bluff that harbors a cave.

No ordinary cave, the kind that hides behind trees and brambles. This monster of a cave seems almost as big as Jam Up and casts a spell on us.

“Let’s go,” we holler out almost simultaneously. Sam’s not joining us, his turn to nap on the gravel bar. We swim across the perfectly warm Jacks Fork and clamber a few minutes up to the entrance, which looms above us three or four stories high. What really intimidates is the mud, reddish-brown goopy slimy stuff that holds footprints, skids and paw prints from previous explorers.

Tristan scoots right up. Me the grandpa barely makes it. Sometimes it helps to be speedy, you don’t get bogged down. He must be part squirrel.

Mud Cave deserves a better moniker, but it does give its essence. This mucky ooze comes from the cave ceiling continuely dripping. Further back in, the drips fall on rock to begin forming stalagmites, toward the front the drips keep the clay moist and mucky.

So many fascinating features back in there: flow stones, colorful mosses, a welcome coolness, the view back out where the river is a tiny trickle within an emerald daylight which seems like a far too busy world compared to the rhythmic drips within the dark stillness of the cavern.

We have no flashlight so ol’ gramps eventually makes his way down the boulders and back into the river. Tristen is snake hunting. Luckily no luck. What a great way to escape the hottest part of the day.

Another chilling method for the next day. Tristen’s family comes to the cabin to pick him up. We have enough boats to go upstream on the Jacks Fork in mid-afternoon. Swim, explore, and maybe a nap in the distant vibes emanating from a big ol’ cedar tree someone has named ‘Old Man Dancing’, for its looks.

This gravel bar may be only a half-mile long, but it features an overhanging elm, which provides shade all afternoon. The river itself goes through some gentle riffles, then broadens out to a limpid run perfect for swimming and finally circles into a deep pool where gar play with Tristen and his half-sister, Draven Luna, most of the afternoon. When he’s not swimming, Tristen fishes, no napping. And explores all over for weird wildlife of all forms.

So many critters scamper around us as we hang out in the shade. Where’s that coon who ate our breakfast out of my pack basket in the middle of the night at Jam Up Cave? He’s probably watching us, hoping to get what we leave behind at Old Man Dancing. He probably knows how to open a beer can.

Before sunset we float back downstream through deep shadows to our vehicles. Hate to leave our river. The buzzards follow us all the way. 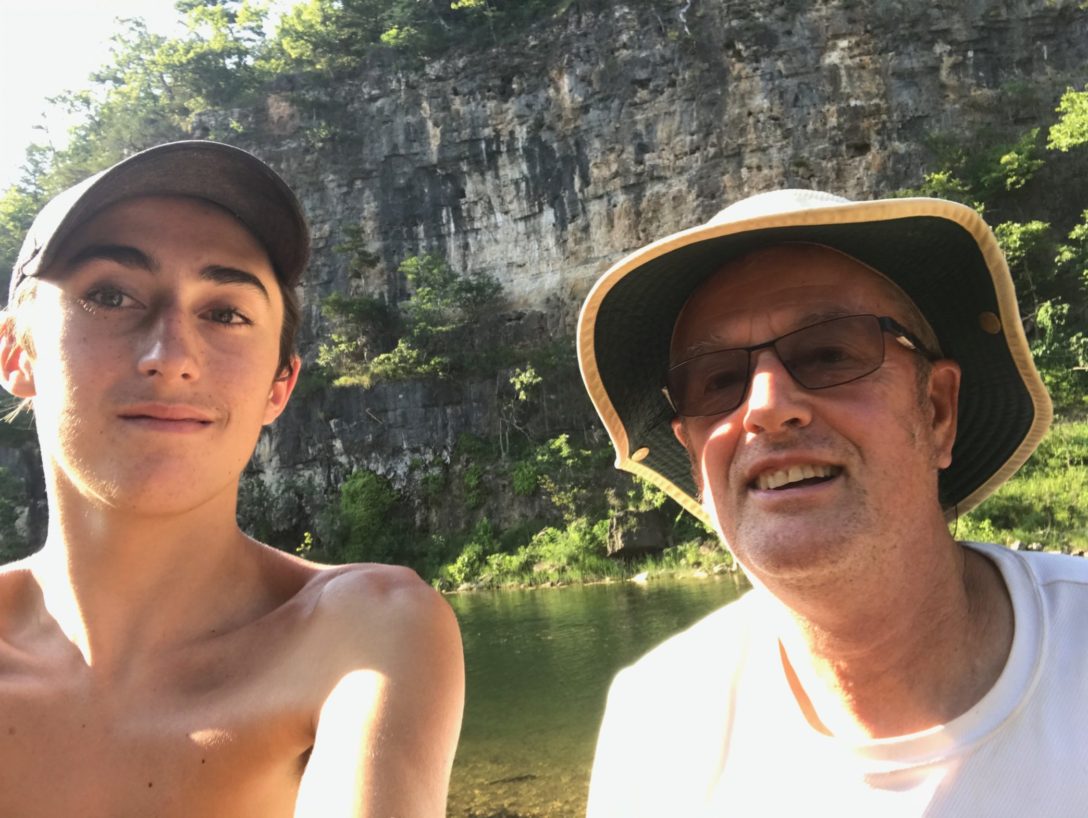