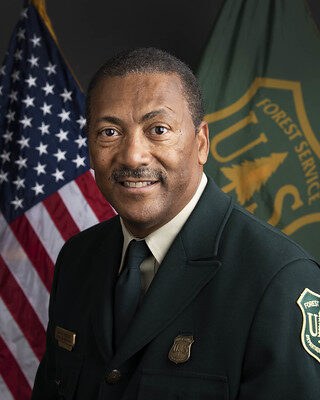 The head of this huge agency was supervisor for the 1.5 million-acre Mark Twain National Forest, headquartered in Rolla, for many years.

In the last five years more than 20 million acres of American forests have BURNED, according to this USFS news release.

Isn’t the Ozarks, and the world, already burning up with climate change? Burning up an additional 20 million acres since 2017 sure hasn’t helped.

Have you ever been Sequoia National Park?

If not, treat yourself! I’ve been to about 60 national parks. Sequoia is one of the very best.

It’s a long trek for us hillbillies out to California. But we can always go to Sequoyah’s Cabin, a national historic site across the line near Sallisaw, Oklahoma.

Sequoyah was an Ozarker, a Cherokee who created his tribe’s written language in 1821, the year of Missouri’s statehood.

This appointment garnered special attention because Randy is the first person of African-American descent to head this essential agency.

From my point of view Randy’s appointment makes total sense because he kept his cool in a half-naked Rainbow family talking circle. That wasn’t easy. As I remember the hot day in July 1987, Mr. Moore was the only person who was fully dressed and wore a stiff ‘Smokey the Bear’ boiled wool broad-brimmed ranger hat.

He listened carefully for a couple of hours in that talking circle.

Randy grew up in Mississippi. He learned to get on with all kinds of people in Forest Service postings all over the United States.

Does he ever think back to the nearly naked Rainbow folks he met with on a sizzling Ozark afternoon? This story and more is in my new book.

When I lived in Rolla, our neighbor was Leon Cambre who was Mark Twain Forest supervisor from 1979 to ’86. Randy took over from Leon, but I never got to know him as I did other dedicated USFS employees such as Kris England, Jay Law, Leon Kridelbaugh, Ross Melick, Lynda Richards, Chuck Tryon and others.

These committed foresters cannot be forgotten. They were hard-working straight shooters, as were most government employees I interviewed during oral history projects.

It’s amazing how an unexpected meeting can last in memory and be influential in unexpected ways. Oral historians know long term memories can last indefinitely.

Memories of naked people might last longest of all.

The last word I’ve heard states my printed books should be available in April. I’m finishing up proof-reading thanks to help from Linda Palmisano and Cathy, my partner in all things ingenious.

Many little tweaks still needed to burnish this red, red rose! It’s challenging to find errors and build an index!

Copies can be ordered now on Amazon and probably other on-line sources. I am encouraging everyone to consider going through a locally owned bookstore to buy the book. Better for local economies. It’s to be available as an e-book or a paperback.

You can also order directly from the publisher, McFarland & Co., in North Carolina. Offering a huge variety of semi-academic titles every year, their webpage is fun to visit. Something surely will tickle your fancy.

This what Ozark Voices also offers, a huge variety of material on our region. More than 50 chapters give verbal pictures capturing local oral history, and show how you can do this too.