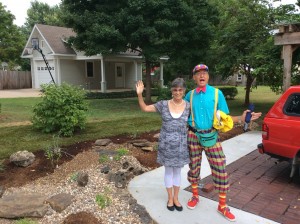 Our friend Garland Owen became one of the first visitors to our sculptural landscape project. It’s turned into a real work of art in the last few days. Gar was on his way to entertain children of the Muslim student association at MSU just down the street.

Impressed with the new plantings of prairie and glade specimens, Gar wondered where we found all the stones. The design follows a dry creek bed pattern. It took several tons of stone and gravel. Thats Gar on the right

“No time to twist you a balloon animal today,” he said as he prepared to walk over to the student center. Gar uses the long skinny colorful balloons to entertain at the local farmers’ market and other sites. His are more animated than those Jeff Koons does at various international museums, more fun to play with, and several million dollars less in price.

Gar’s making a good living as a balloon sculptor however, partly because he has so many other talents such as juggling, acting and playing mythological characters. His Santa’s totally jolly and wigged out. This guy is a permanent visitor to the new rain-garden thanks to the fabulous Springfield artist, Christine Schilling.

The guys who built our new garden also seemed pretty totally jolly though down-to-earth. It took the three guys who work for Paul Armstrong’s Smiling Sun LLC a full week to convert part of our back yard into the dry, rocky creek bed.

I’d been skeptical about the whole project. Cathy sort of talked me into it. Let’s just say it wasn’t cheap, but Paul did most of the designing with our input and his crew’s heavy lifting. The guys from Smiling Sun work very hard. Here also you can see the cobblestones from Cross Creek.

It was over 100 degrees in the shade most of the week Dave, Mike and Chubbs worked on the garden. They didn’t complain. Nice breeze most of the time, they said.

We’re putting a simple car port in the back yard. The stamped concrete bricks filled up with washed in mud right away. Paul said a rain garden will take care of that runoff. They dug a deep hole, filled it was large diameter gravel and designed the rock work and plantings to fit around that.

“What about all these nice, big fieldstone?” I asked Paul. “I sort of don’t like seeing Ozark river rocks ending up in peoples back yards. It seems tacky. They belong along the creeks and rivers, not as suburban decorations.” Hard to visualize the finished product at this stage.

“Most of these came from a farmer’s pasture,” Paul said. “He wanted them out of there. We’re doing him a big favor to bring them into town.”

Another landscaper who works in the neighborhood, Mike Rankin, gave us a load a landscaping stones he no longer needs a few weeks ago. Many of the rocks had old concrete still stuck onto one side or the other. I guess in a town like this theres always someone who will use your “character rocks,” as Paul calls them.

We had to line part of the new driveway with granite cobblestones that came from a local architectural remnants supply store called Cross Creek. It’s loaded with all kinds of cool stuff from old buildings.

“These paving stones came from Kansas City,” Jason the owner there said. “I heard they originally came here from Belgium as ship ballast.”

So this garden has come from everywhere. I hope the Monarch butterflies will continue to fly by. We saw a few last week as the crew planted the starts Paul had selected. They’re all Ozark natives that can withstand heat and drought, flooding and winter. Finished product BEFORE plants. We waited for the 100 degree temps to break before planting.

The Monarchs are starting to head to Mexico. The few that are left. At least they are not extinct yet, like the Passenger Pigeon. The last one died 100 years ago this week in the Cincinnati zoo.

Maybe we humans will be next. With the world news these days at least it’s good to feel this garden will survive us. It shouldn’t take much maintenance. The seasons will mellow any rough edges. Stop by and see how many of these plants you know.

May it remind us to go out on an Ozark stream to enjoy the cool flow, the best massage in the world.