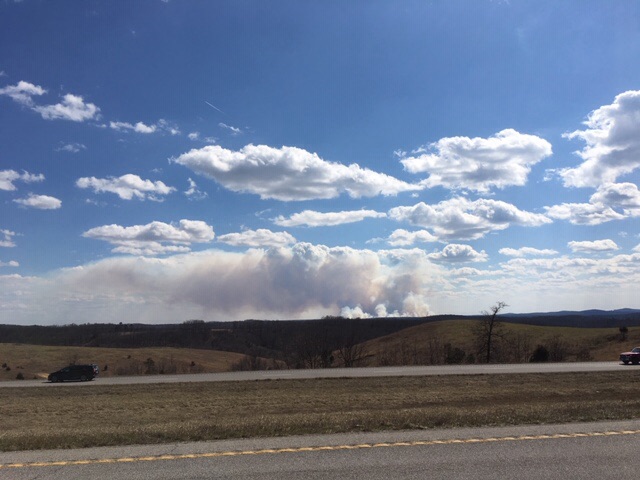 Driving from our cabin on the Jacks Fork a few days ago, March 17, I felt I was back in Rockies. South of US60 the horizon near Blue Buck Mountain seemed engulfed in huge forest fires. We had been west several years ago and saw monster clouds near Los Alamos from blazes that killed a number of firefighters.

The Ozarks are different than western forests and their recent fires. We rarely get crown fires. Our forest fires stay on the ground and don’t engulf whole trees.

This fire was probably set by the Conservation Department or the Forest Service on lands they manage.

I called friends who live nearby. They weren’t worried. Just a spring thing. Burning the woods is an old Ozark tradition.

While working at our cabin I was tempted to start a small fire in a clearing created by tornadoes that came through in 2009. We have some prairie grasses doing well, but the poverty grass is doing better. Wish I had time to set that back and release other species.

It’s tempting to mess around with the forest and its understory to promote certain plants. But my efforts seem so miniscule in the vast unfolding process of spring in the Ozarks.

I ended up cutting down an oak that could eventually shade our solar collectors. It was a good challenge, but our neighbor Sam Gifford came by and supervised where to drop the oak.

I hate cutting down trees. But I know they can grow back very quickly. By the time I come back they will all be leafed out.

Winter officially ended a few days ago. By April Fools Day I will be in China with a chance to teach some Ozark oral history.

But I will have not forgotten the fires of spring. Winter this year has lasted far too long. I am ready for a change. I’m ready for China. Smoke and clean air remain huge issues everywhere. Too much heat from climate change. Everything is changing so fast there, I know from four previous trips.

Fresh water is a huge problem for China.  They have to be smart engineers and work with nature.

It’s changing in the Ozarks too, just not quite so fast. We are lucky to have plenty of good, clean air and water, unless a crazy political administration develops shortsighted policies..